Was the grove snail Epipaleolithic livestock in Western Europe?

The problem of disjunct distribution of Western European species or, in this case, subclades of a single species is nothing new and has been startling biologists for almost two centuries already, with particular interest of Irish-Iberian, Breton-Iberian or just general Irish-continental disjunct relationships of various species (the so called Lusitanian distribution). Among them is the iconic strawberry tree (madroño in Spanish, found in Ireland but not Great Britain) but also a number of small land animals: the Kerry slug (found in NW Iberia and SW Ireland only), the Quimper snail (found in NW Iberia and Western Brittany) or the Pyrenean glass snail (found in the Pyrenees and Ireland).

There are also cases of subclades within an otherwise widespread species which show a similar pattern. In 2003, Masheretti et al. demonstrated that the Irish variant of the pygmy shrew had its greatest affinity with populations of Andorra, in the Eastern Pyrenees, from which they are descended.

This study illustrates a similar case but affecting the snail species Cepaea nemoralis (grove snail or brown lipped snail), whose Irish lineages are mostly derived from Iberian ones and in most cases from the Eastern Pyrenean haplogroup C.

The origins of flora and fauna that are only found in Ireland and Iberia, but which are absent from intervening countries, is one of the enduring questions of biogeography. As Southern French, Iberian and Irish populations of the land snail Cepaea nemoralis sometimes have a similar shell character, we used mitochondrial phylogenies to begin to understand if there is a shared “Lusitanian” history. Although much of Europe contains snails with A and D lineages, by far the majority of Irish individuals have a lineage, C, that in mainland Europe was only found in a restricted region of the Eastern Pyrenees. A past extinction of lineage C in the rest of Europe cannot be ruled out, but as there is a more than 8000 year continuous record of Cepaea fossils in Ireland, the species has long been a food source in the Pyrenees, and the Garonne river that flanks the Pyrenees is an ancient human route to the Atlantic, then we suggest that the unusual distribution of the C lineage is most easily explained by the movements of Mesolithic humans. If other Irish species have a similarly cryptic Lusitanian element, then this raises the possibility of a more widespread and significant pattern.


The evidence gathered by this study is most readily visible in fig. 2: 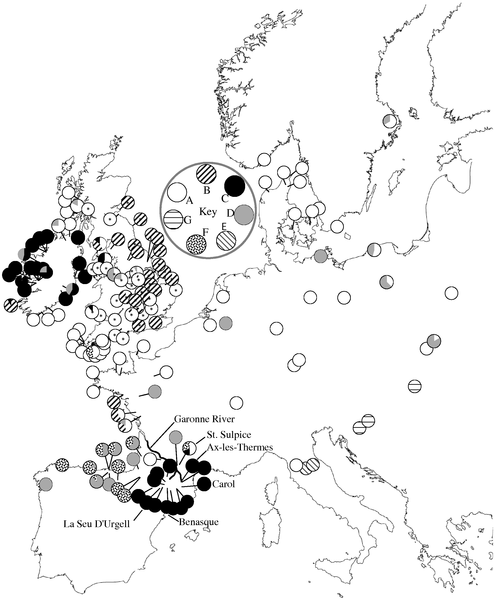 While it is not the focus of this study, we see here two other cases of probable disjunct distribution:
The authors of this and previous studies have suggested that this distribution may have to do with intentional transport (as livestock) in the process of the colonization of the Atlantic Islands in the Epipaleolithic. In support of this claim, there is enough fossil evidence of the snail in the island:

In other cases, such as the inedible Kerry slug, we may suspect unintentional transport and therefore we would be justified to imagine a later time frame for their arrival to Ireland, possibly in the Chalcolithic-Megalithic period, but the evidence for C. nemoralis is highly suggestive of intentional transport in the Epipaleolithic. We can therefore say that the humble grove snail was one of the first domestic animals of Europe, possibly second after the dog.
Posted by Maju at Wednesday, June 26, 2013