There is some debate about the connection between the Jomon period (Japan's ceramic but pre-agricultural period, extending between c. 16,000 to 2300 years ago) and the Ainu, as well as Ryukyuans and other peoples, including mainstream Japanese. A new study provides some extra bits of information to fuel the debate:

The researchers sequenced ancient mtDNA from Jomon remains from a shell mound of Sanganji (Fukushima), which produced two M7a2, one N9b2 and one (incomplete) N9b* sequences.

Referring to previous similar studies as well, they produced the following tables: 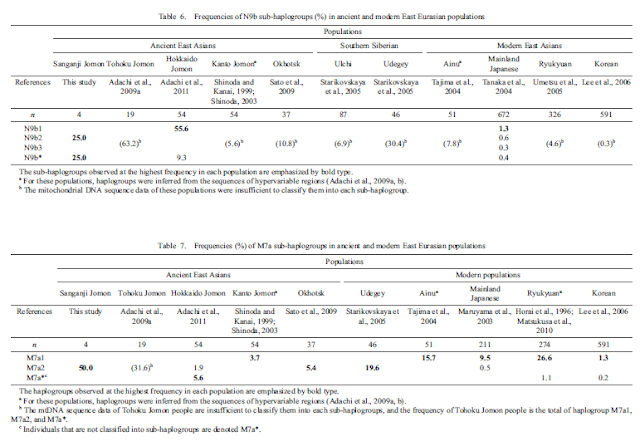 From this data it would appear that the ancient Jomon people would be most closely related to modern Udegey (or Udege) from the Amur region of Eastern Siberia (with the possible exception of the Kanto Jomon, who may be closest to Ryukyuans instead).

The Ainu, it must be said, are next in line after the Udege, and I wonder if recent admixture may be distorting their relation. Another issue is that in such an extensive period of almost all the Holocene and even some millennia into the Pleistocene, there may have been flows and variability also within the Jomons (the Sanganji shell mound is dated to c. 4000-2500 BP, for example).

Whatever the case, it seems clear that N9b was an important matrilineage among ancient Jomon peoples, while M7a (now most common among Ryukyuans) was present but less common, with the Sanganji sample being rather exceptional in this.
Posted by Maju at Sunday, June 02, 2013