As I mentioned before, I have already got copies of the controversial study by Paul Mellars et al., which argues for a very late colonization of Eurasia. It includes some aspects not dealt with in the first round, when I could only access the supplemental material.

Maybe the most important is the very striking visual comparison between proto-LSA African microlithic industries and post-UP South Asian microlithic ones: 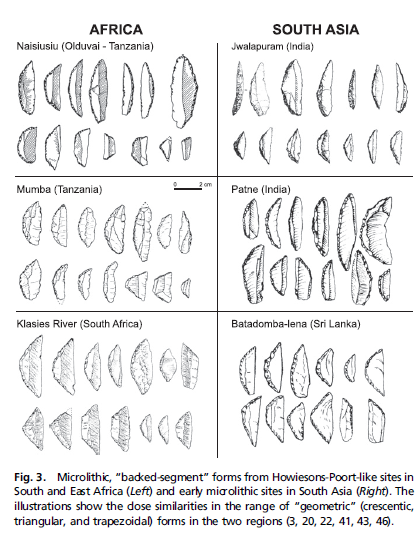 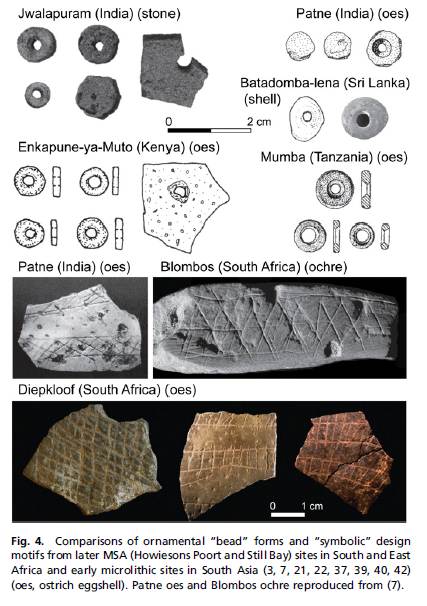 While it is maybe easy to dismiss the patterns drawn on ostrich shells in Africa and South Asia as not really looking the same at all and therefore likely coincidence, the visual comparison of the industries is much harder to reject. It does indeed pose a mysterious apparent link similar to others that are hard to explain like the similitude between Chatelperronian and Gravettian (not so long ago treated together as "Perigordian") or the hammering insistence by some rather marginal academics on the similitudes between the SW European Solutrean culture and the (much more recent) North American Clovis industry.

Sure: impressive and intriguing. But when it comes to chronology the Mellars hypothesis seems to fail terribly. While the African microliths are pre-LSA and therefore from before ~49,000 years ago in all cases, the South Asian ones only show up mostly since c. 34-38,000 years ago, more than ten millennia later. Mellars makes this figure 40-35 Ka and then just 40 Ka for the following graph, which in fact misrepresents Petraglia's model and data in a key issue (see below): 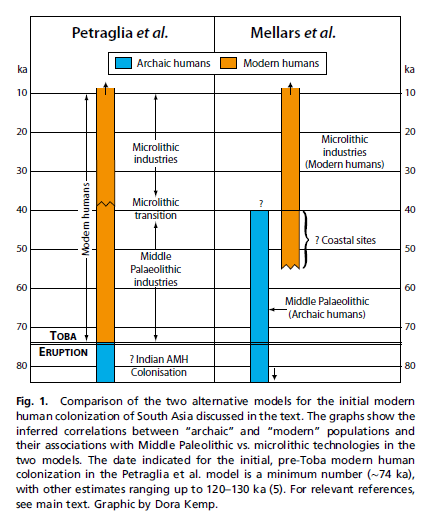 It must be emphasized here that Petraglia's data and model, at least for what I know it, implies an hiatus between c. 110 Ka and c. 80 Ka BP, hiatus for which there is no archaeological data of any kind in South Asia. Therefore neither side graph should suggest continuity to the past before ~80 Ka, allowing at most for a highly hypothetical dotted line (as in Petraglia 2010): 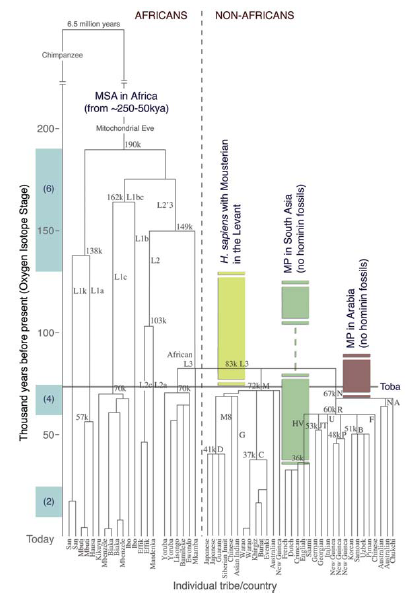 Also there is nothing in Petraglia's work that could suggest discontinuity at the Toba ash layer, as suggested by Mellar's version, rather the opposite: continuity is very apparent in Jwalapuram:

Quite conveniently Mellars ignores Petraglia's data again, which suggest continuity before and after microlithism in Jurreru Valley and then also finds a transition towards UP ("blade and bladelet", as well as "backed artifacts") technologies since c. 34 Ka BP.

But regardless, I'm pretty sure that Prehistory-savvy readers have already noticed a major issue in all this chronology: we are talking of dates that are almost 20,000 years after the colonization of West Eurasian by H. sapiens with "Aurignacoid" technologies, which are dated to before 55 Ka BP in Palestine (OSL), to c. 49 Ka BP in Central Europe and to c. 47 Ka BP in Altai (C14 calibrated).

And those who are also familiar with Eurasian population genetics are by now shaking their heads in disbelief and claiming to heaven and hell alike. Because West Eurasians derive, at a late relative date, from Tropical Asians and therefore, if our core ancestors were already separated before 55 Ka BP, there is just no room for the Tropical Asian (and Australasian) expansion that must have preceded the Sapiens colonization of the West Eurasian Neanderlands.

(Those unfamiliar with the basics of Eurasian population genetics, see here).

So there is no way that the Out of Africa migration could be dated to just c. 55 Ka BP, as Mellars does (after grabbing hard the burning nail of conjectural coastal sites now under the sea, which would have to account for some 15-20,000 years of Eurasian prehistory on their own).

In fact it is also impossible from the viewpoint of Australian chronology, which again needs to go after the settlement of Tropical Asia but surely before that of West Eurasia.

So, regardless of the striking visual comparison between African and Indian industries, which is no doubt the "bunny in the hat" here, the Mellars hypothesis simply doesn't stand.

Was there another cultural (surely not demic) flow from Africa to South Asia c. 40-35 Ka BP? Maybe. Or maybe it is just one of the many hard-to-explain coincidences in stone industry design. But whatever it is, it just cannot be the Out-of-Africa migration, unless one is ready to accept that Aurignacian and related European rock art, as well as Australian rock art, for example, are the product of archaic homo species (something that I am sure that Mellars won't admit to: it just goes against his "modern human behavior" prejudices). And, even then, it just doesn't add up either.

... Professor Michael Petraglia, an archaeologist from the University of Oxford disputes Richards' and Mellars' argument.

Petraglia says there's not enough evidence to rule out an earlier colonisation before the eruption of Mount Toba.

"The research reported by Mellars and colleagues is riddled with problems," he says.

Petraglia says that the similarity between tools used in Africa 60,000 years ago and those from Asia dating to around 35,000 years ago is not a consequence of direct migration.

"These toolkits are separated in time by more than 20,000 years and distances exceeding several thousand miles."

He questions the evidence supporting a migration along the coast. He says that surveys of ancient shorelines have not revealed any evidence for human settlements anywhere along the Indian Ocean shore between 55,000 and 50,000 years ago.

He also says genetic dating should be treated cautiously.

"Most geneticists will admit that genetic dating of the out-of-Africa event is tenuous, at best. Published genetic ages for out-of-Africa range anywhere between 45,000 to 130,000 years ago.

Petraglia says his team is currently conducting archaeological fieldwork in Arabia, India and Sri Lanka they expect will show that the story of human dispersal from Africa is complex.

"What we can agree on is that little research in these key geographic regions has been conducted and much more evidence needs to be collected to support or refute the different theories," says Petraglia.