It took me quite a while to get time to look at this study in some depth and when I finally did I must say I was rather disappointed. In any case the popular demand makes necessary to discuss it.

The study has two aspects: one, of great interest, which is the sequencing of a number of ancient remains, the other a complex and quite poorly explained and rendered speculation on how these sequences could be used to produce a refined molecular clock.

Most of the sequences used by Fu et al. in their molecular clock speculations are new and that part is very interesting:

I have highlighted in lime green the new sequences, otherwise also noted by the marker b. It is of note that the "Crô-Magnon 1" sequence produced a C14 age of just a few centuries, being therefore removed from the collection. Other Crô-Magnon 1 remains produced no useful data.

The authors also decided to discard as possibly contaminated the UP sequence  from Pagicci Str. 4b. I have highlighted in red why they decided to do so: because the C→T misincorporation rate, characteristic of ancient remains, is too low, what makes contamination at least a serious probability.

So we have as new data for the Upper Paleolithic landscape in Europe that the people of Dolni Vestonice carried lineages U* (found also in Swabian Magdalenian) and U8, in the line of haplogroups K, U8a (Basque) and U8b (Eastern Mediterranean). Also some late UP and Epipaleolithic sequences from Oberkassel (Low Rhineland, Germany), Loschbour (Luxemburg) and Continenza (Abruzzo, Italy) are U5b variants, consistent with other findings from various parts of Europe. In Paglicci (Apulia, Italy), another sequence yielded U2'3'4'7'8'9, surely an extinct variant of the ancestor of U8 and U2 (among other lineages). No radiocarbon date is available for any of the Italian remains.

In East Asia, Boschan, with B4c1a, provides one of the first Epipaleolithic sequences for the region.


The authors seem to intend, or so declare, to refine the molecular clock estimates by means of using these sequences as intermediate calibration references. Here I get the first big question: with all the literature on ancient DNA, why only these sequences? No idea.

Then the contradictions arise. I believe that I have synthesized the most obvious ones in the following marginal annotations (in red) to their molecular clock estimates: 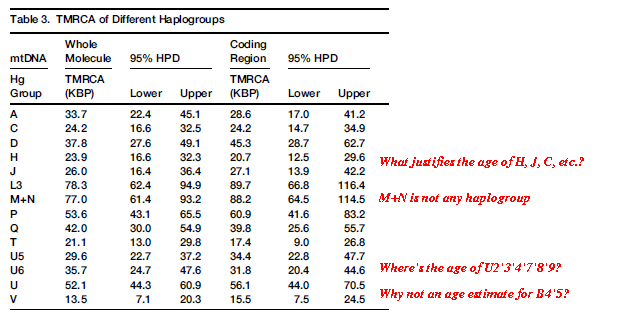 Furthermore, the authors claim in the text that U5 is the oldest branch to diverge from U, however their TRMCA figure is of only 34.4 Ka BP (coding region), while Kostenki 14 has an age of 38 Ka BP and already carried U2, what really makes this claim extremely unlikely: U2 and its ancestor U2'3'4'7'8'9 should be considered the oldest U sublineage.

In brief: the claims of this paper on molecular-clock-o-logy are ill-explained, confusing, incoherent... a total mess. The raw data on ancient mtDNA is however good looking and of doubtless interest.
Posted by Maju at Thursday, April 18, 2013