Synthesis of the Spanish-language series on the expansion of H. sapiens (2)

One of the reasons I have been a bit too saturated and maybe not writing as much as usual is that I am collaborating in a series in Spanish language for the blog Noticias de Prehistoria - Prehistoria al Día.

I already mentioned last month the initial article[es] of the series by David Sánchez, which dealt with the African Middle Paleolithic (MSA, Lupembian, Aterian, etc.) We have not been idle in the meantime but actually wrote a number of other articles that may well be of your interest:

There is still a lot to do for the series to be complete but the time for a synthetic review in this blog is quite overdue. I will skip the brief intro to population genetics on the belief that most readers here have a decent idea, but the other three articles ask for due mention.

This is something that complements David's analysis of the African MP and that to a great extent I dealt with already at my former blog Leherensuge. I like graphs and maps because they often tell more than just words:

We can see in this graph two main "moments" of diversification or expansion:
The latter may well be calibrated with the archaeological evidence for the arrival of H. sapiens (MSA) to Southern Africa (L0d), which may be as old as 165 Ka but shows a clear increase in density since c. 130 Ka. I'd rather lean for the later date, that is roughly coincidental with the beginning of the Abbassia Pluvial, which must have provided good opportunities for expansion also in more northernly latitudes (the other nodes).

The first expansion is harder to estimate but c. 160 Ka. is a time in which we can see some of the first signs of expansion of our species within Africa (Jebel Irhoud and the already mentioned first Southern African MSA) so it is a tentative date.

The geography of both expansions should be as follows (based on the raw data of Behar 2008):

I also mentioned the expansion of L3, which preludes the migration Out of Africa, but this was already discussed in this entry.


Arrival to Arabia and Palestine


While most of the entries I am doing for this series deal with the genetic aspects, in this case I worked mostly with the archaeology, recycling many materials that are readily available in this blog and achieving the following synthetic map (recycling one by Armitage 2011) as central element of the article: 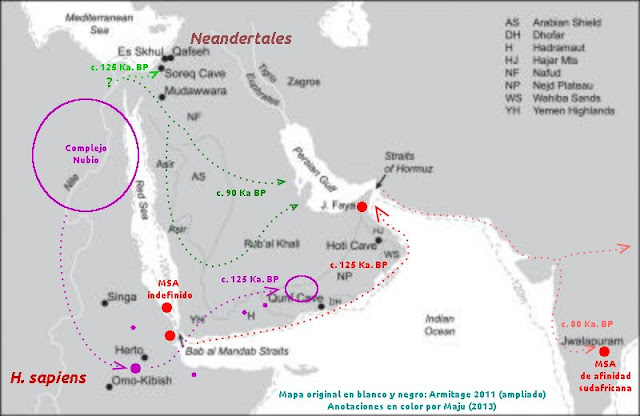 In addition to reviewing the archaeological discoveries of the last few years (and few older ones) I also discussed the issue of Neanderthal admixture, which most likely happened in this phase, and the possibility of some L(xM,N) lineages found in Arabia being from this period (see here).

The last article so far in the series, authored by David Sánchez, has been published just today and is a very good visual review of the complex archaeological record of most of Asia in the period that interests us (most Middle Paleolithic with marginal mention of the earliest UP of West Asia, Siberia and neighboring areas, which will be reviewed more in depth in later articles). Probably the maps say it all, although we must understand that they only consider the best known sites:

I must say that the design of the maps is not quite the way I would have done myself but is still interesting. Very especially I miss lots of info on post-Toba South Asia. Also the Altai transition is not really well explained in my understanding. On the other hand East Asia is full of details and the overall picture of the archaeology of the Eurasian expansion is well described nonetheless.

PS- from the commentaries by David at his blog, it seems clear that he gives for granted the occupation of South Asia after Toba and therefore he did not consider it important to mark any more recent sites in the subcontinent.
Posted by Maju at Wednesday, April 24, 2013