The expansion of Neolithic in Europe (synthetic maps)

This is relatively old material (2009) but the resuscitated Spanish-language blog Neolítico de la Península Ibérica has recently discussed and synthesized it. And I am sure that much of what is said in it is of great interest for readers of this blog, beginning with myself. Hence I'm including here some of the maps discussed there because they truly synthesize very well the big picture of European Neolithic as a discontinuous and highly irregular process.

Firstly a map of "vectors" of Neolithic influences/flows, showing some eight apparent zones of expansion: 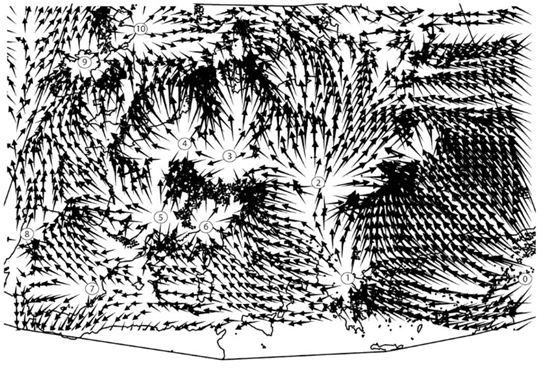 The numbers may be misleading. The actual chronological order is (by oldest referenced C14 date, which must be calibrated BCE):
The exact chronology for Southern European Neolithic, very especially in Iberia, where some dates insist on being pre-Cardial, is yet to be properly determined but whatever the case it is older or contemporary from the more popular Danubian Neolithic of Central Europe.

Many details are obviously not addressed here, so always take this kind of general approaches with some caution: the devil is often in the details, and many details are missing here.

Still I do feel that the overall description of the process is quite realistic, notably when we also consider this other map that provides a much more clear cultural contextualization:

The maps are very educative if nothing else. However particular caution must be warned, not just about the many highly debatable details but very notably on the nature of Eastern European Neolithic, often not well described in these analysis, whose most representative culture is Dniepr-Don (located in the basins of these two rivers in Ukraine and Russia mostly) and whose genesis seems very locally rooted (what is emphasized by the persistence of hunter-gathering even after farming and herding and pottery have been consolidated). This culture was also very influential in its own way (alone or later with/under the maybe related Samara-Khvalynsk culture: proto-Indoeuropeans, whose ultimate origins remain in wait of archaeological work).
Posted by Maju at Saturday, December 29, 2012