The Paleolithic of the Three Gorges region of China

The controversial construction of the Three Gorges Dam served at least to make some extensive and intensive archaeological research in the area, evidencing human presence in much of the last million years.

The contributions of the Chinese Paleolithic record to broader ranging paleoanthropological debates have long been difficult to decipher. The primary problem that hinders many contributions that include or focus on the Chinese record is that relatively few regions outside of the main flagship sites/basins (e.g., Zhoukoudian, Nihewan Basin, Bose Basin) have been intensively researched. Fortunately, systematic archaeological survey and excavations in the Three Gorges region, South China over the past two decades has led to the discovery of a number of important hominin fossils and Paleolithic stone artifact assemblages that have contributed to rethinking of ideas about hominin adaptations in Pleistocene China. This paper provides a detailed review of the results of recent paleoanthropological, particularly Paleolithic archaeological, research from this region.

The Three Gorges region is located in the transitional zone between the upper and middle reaches of the Yangtze River (Changjiang River). Vertebrate paleontological studies indicate that the faunas from this region belong primarily to the AiluropodaeStegodon faunal complex, a group of taxa representative of a subtropical forest environment. Systematic field surveys identified sixteen Paleolithic sites in caves and along the fluvial terraces of the Yangtze River. Based on geomorphology, biostratigraphy, and geochronology studies, these sites were formed during the Middle to Late Pleistocene. Follow up excavations at these sites led to the discovery of a large number of Paleolithic stone artifacts, Pleistocene mammal fossils, as well as some hominin fossils. Analysis of these materials has provided the opportunity to reconstruct hominin technological and mobility patterning in a restricted spatial point. The Paleolithic technology from the Three Gorges region is essentially an Oldowan-like industry (i.e., Mode 1 core and flake technologies) comprised of casual cores, whole flakes, fragments, and chunks as well as a low percentage of retouched pieces. The utilized stone raw material is primarily high sphericity cobbles and limestone, which were locally available along the ancient river bed and surrounding terraces. Most of the artifacts are fairly large in size. All flaking is by direct hard hammer in a single direction without core preparation. Unifacial choppers are the predominant core category, with fewer bifacial choppers, sporadic discoids, polyhedrons, and bifaces. The flake types demonstrate that the first stage of core reduction is represented by a low percentage of Type III and VI flakes. Some flakes are retouched unifacially by direct hard hammer percussion on the dorsal surface of the blanks. Archaic Homo sapiens and modern H. sapiens identified from some of the cave deposits are likely the hominins responsible for the production of the stone artifacts. Implications for Oldowan-like technological patterning in South China are discussed.

There is rather high detail in this paper in spite of the stone tools of East Asia tending almost invariably to simple flake forms hard to classify, arguably caused by the lack of good quality materials. But I guess that the most relevant of all is this chronology: 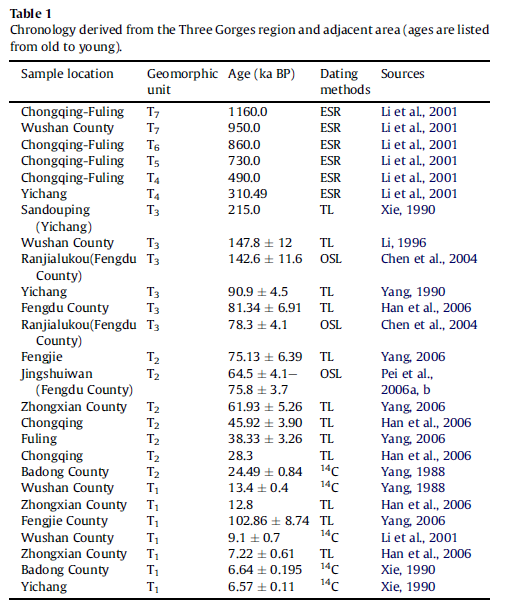 Of great interest are no doubt the human (or hominin) fossils found in these and previous digs. If my recollection is correct these are:


It is not clear if by archaic Homo sapiens the authors mean Homo sapiens with debatable archaic features or, using obsolete terminology, other species of Homo such as Homo erectus. I'm guessing that the latter but no idea. 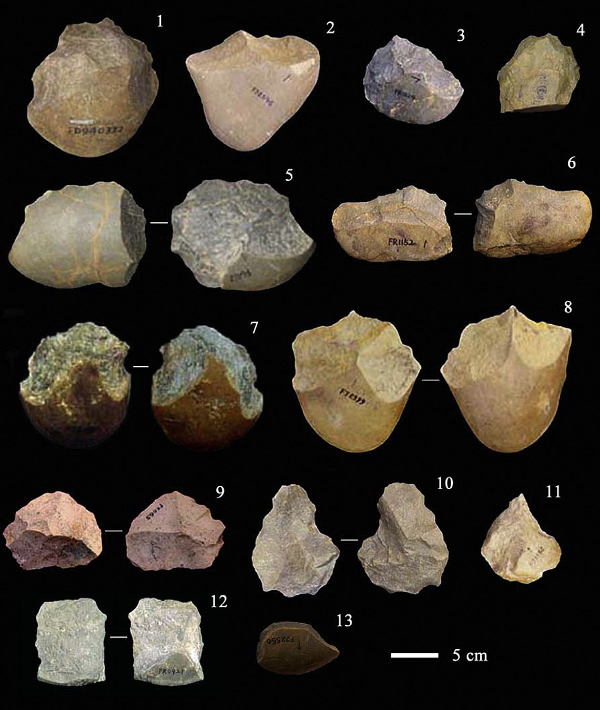