Terry points me to this paper:

The dispersal of modern humans across the globe began ∼65,000 y ago when people first left Africa and culminated with the settlement of East Polynesia, which occurred in the last 1,000 y. With the arrival of Polynesian canoes only 750 y ago, Aotearoa/New Zealand became the last major landmass to be permanently settled by humans. We present here complete mitochondrial genome sequences of the likely founding population of Aotearoa/New Zealand recovered from the archaeological site of Wairau Bar. These data represent complete mitochondrial genome sequences from ancient Polynesian voyagers and provide insights into the genetic diversity of human populations in the Pacific at the time of the settlement of East Polynesia.

The authors sequenced ancient mtDNA from the pre-colonial period from a museum material being returned for proper reburial. The remains belong to a population from Wairau Bar from the 13th-14th centuries, which were looted by British museums in the mid 20th century.

Of the 19 individuals researched, only four provided valid sequences. All four Three were within the so-called Polynesian motif or haplogroup B4a1a1a, the other was Q1, a lineage of Melanesian origin also found, albeit rarely, among other Polynesians. All modern studied Maoris are B4a1a1a but Q1 is known to exist among Cook Islanders, for example. (Corrected: Q1 is mentioned but in the context of other Polynesian populations, not New Zealand). 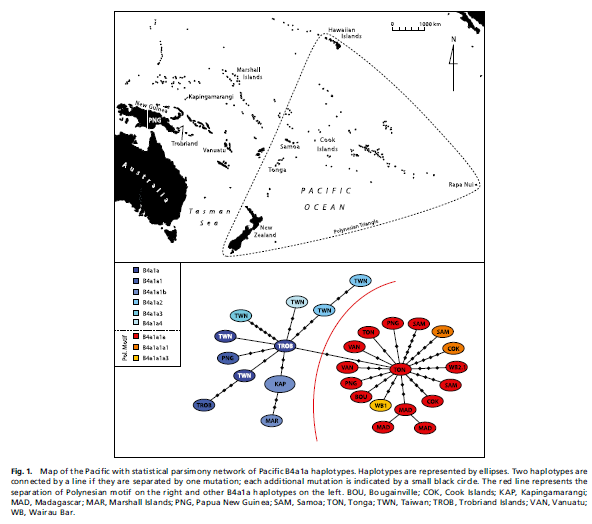 Interestingly the authors also explain that the colonization of Eastern Polynesia was performed not in a series of small randomized migrations but in a single expansive wave in the 12th-13th centuries CE, what explains the relative homogeneity of their customs and languages.

A recent reevaluation of the dates for the colonization of East Polynesia suggests that, contrary to earlier studies positing a relatively long (2,000 y) chronology for the region, the settlement of most of East Polynesia occurred rapidly, in the period from A.D. ∼1190–1290 (22). The authors determined that the expansion event occurred from the Society Islands, which were only settled 70–265 y previously. This rapid and recent expansion event, they argue, explains the “remarkable uniformity of East Polynesian culture, human biology and language” (22).