This should be of some interest:

Signals of archaic admixture have been identified through comparisons of the draft Neanderthal and Denisova genomes with those of living humans. Studies of individual loci contributing to these genome-wide average signals are required for characterization of the introgression process and investigation of whether archaic variants conferred an adaptive advantage to the ancestors of contemporary human populations. However, no definitive case of adaptive introgression has yet been described. Here we provide a DNA sequence analysis of the innate immune gene STAT2 and show that a haplotype carried by many Eurasians (but not sub-Saharan Africans) has a sequence that closely matches that of the Neanderthal STAT2. This haplotype, referred to as N, was discovered through a resequencing survey of the entire coding region of STAT2 in a global sample of 90 individuals. Analyses of publicly available complete genome sequence data show that haplotype N shares a recent common ancestor with the Neanderthal sequence (∼80 thousand years ago) and is found throughout Eurasia at an average frequency of ∼5%. Interestingly, N is found in Melanesian populations at ∼10-fold higher frequency (∼54%) than in Eurasian populations. A neutrality test that controls for demography rejects the hypothesis that a variant of N rose to high frequency in Melanesia by genetic drift alone. Although we are not able to pinpoint the precise target of positive selection, we identify nonsynonymous mutations in ERBB3, ESYT1, and STAT2—all of which are part of the same 250 kb introgressive haplotype—as good candidates.

According to Wikipedia, STAT2 is a gene which offers immunity against adenoviruses, which are related to respiratory illnesses (common cold, pneumonia, bronchitis...) and some other common diseases like conjunctivitis or gastroenteritis. Most infections are mild and require no specific treatment.

This suggests me that the selective pressure was quite weak, if any at all, so its introgression is most likely the product of a fluke and not selection. However it is not totally impossible that in the past some viral strain was particularly deadly causing adaptive selection.

Whatever the case it is also interesting to take a look at SNPedia, which lists five SNPs in this gene:

I can only imagine (as I have not got access to the paper, so I can't double check)  that the introgressed haplotype includes the first two SNPs in their T variants (see below). If so, the Neanderthal allele should cause: increased risk of osteopenia in women, some increase in the likelihood of lymphoma, among other things (arthritis, asthma?) which I'm not sure about. I do not see any indication of the haplotype being beneficial in any way but you tell me.


Update: I just got a copy of the paper, so I share these key figures: 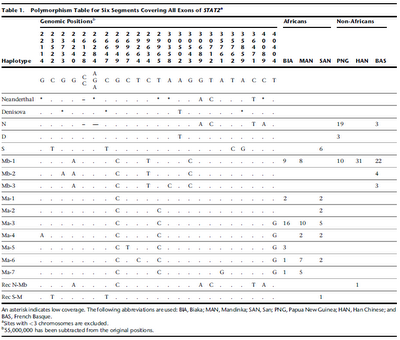 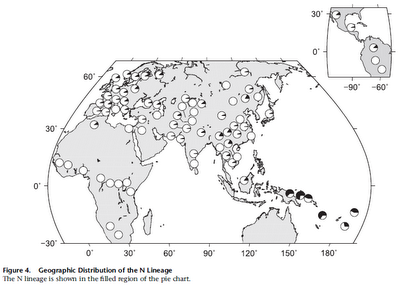 We can also see in the map how the haplotype N is distributed in what would seem to be random founder effects.

There is a chance that the Denisova variant (haplotype D) is found in some Papuans but being described by just a single transition this is not certain.

As you know I dislike molecular-clock-o-logy, which I consider close to pseudoscience but considering that there has been some paper recently claiming (as they usually do: as if it was rocket science instead of a mere educated guess) low divergence ages for Neanderthals and H. sapiens, I feel almost obliged to mention that this paper estimates the haplotype divergence at some 500-731 Ka., what, after correcting for the usual under-estimate of the Pan-Homo divergence, can be consistent with the classical archaeological understanding of the Neanderthal-Sapiens divergence before a million years ago, with the spread of Acheulean and H. heidelbergensis.
Posted by Maju at Monday, August 13, 2012