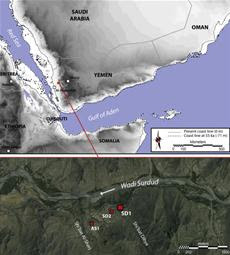 Yet another South Arabian industry has been researched and described, this time in the mountain range of Western Yemen, which runs parallel to the Red Sea coast.

The recovery at Shi’bat Dihya 1 (SD1) of a dense Middle Paleolithic human occupation dated to 55 ka BP sheds new light on the role of the Arabian Peninsula at the time of the alleged expansion of modern humans out of Africa. SD1 is part of a complex of Middle Paleolithic sites cut by the Wadi Surdud and interstratified within an alluvial sedimentary basin in the foothills that connect the Yemeni highlands with the Tihama coastal plain. A number of environmental proxies indicate arid conditions throughout a sequence that extends between 63 and 42 ka BP. The lithic industry is geared toward the production of a variety of end products: blades, pointed blades, pointed flakes and Levallois-like flakes with long unmodified cutting edges, made from locally available rhyolite. The occasional exploitation of other local raw materials, that fulfill distinct complementary needs, highlights the multi-functional nature of the occupation. The slightly younger Shi’bat Dihya 2 (SD2) site is characterized by a less elaborate production of flakes, together with some elements (blades and pointed flakes) similar to those found at SD1, and may indicate a cultural continuity between the two sites. The technological behaviors of the SD1 toolmakers present similarities with those documented from a number of nearly contemporaneous assemblages from southern Arabia, the Levant, the Horn of Africa and North Africa. However, they do not directly conform to any of the techno-complexes typical of the late Middle Paleolithic or late Middle Stone Age from these regions. This period would have witnessed the development of local Middle Paleolithic traditions in the Arabian Peninsula, which suggests more complex settlement dynamics and possible population interactions than commonly inferred by the current models of modern human expansion out of Africa.

The dates are relatively late, considering we know now of sites in the area since c. 130,000 years ago (in Palestine, Dhofar and Sarjah) but the site is still an interesting addition to the collection of reconstructed stories of the peoples who lived in Arabia early on, whose genetic remnants are still present most probably according to Behar 2008.

I find particularly interesting that the peoples of this culture made blade tools, which are previously only common in South Asia. But some "Levallois blades" are known to exist in Mousterian contexts for examples, being different in production from Aurignacoid ones - and this seems to be the case. 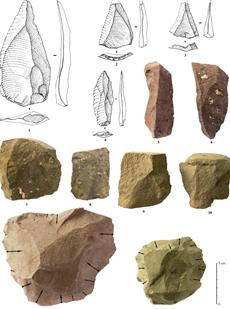 In fact the review article I could find at USA Today (h/t Pileta), rather suggests Mousterian affinities in fact:

Most intriguing, the stone tools found at the site fall into the tradition of older Stone Age tools, rather than ones associated with the early modern humans thought to have left Africa roughly 60,000 years ago. They might have belonged to descendants of earlier modern human migrants from Africa who established themselves in Arabia despite its desert conditions. Or maybe they belonged to a sister human species, our Neanderthal cousins, suggest the researchers:

"Our fieldwork at the Wadi Surdud in Yemen demonstrates that during the period of the supposed expansion of modern humans out of Africa (60,000 to 50,000 years ago), and their rapid dispersal toward south-eastern Asia along the western and southern Arabian coastlines, the interior of this region was, in fact, occupied by well-adapted human groups who developed their own local technological tradition, deeply rooted in the Middle Paleolithic. Future research will likely reveal whether the archaeological assemblages recovered from the Wadi Surdud can be associated with the descendents of anatomically modern human groups who occupied the Arabian Peninsula during (this era) or the southernmost expansion of the Neanderthals."

Everything is possible but we should not forget that the Homo sapiens of Palestine did use Mousterian technology, a fact that may be related to Neanderthal genetic introgression among us.

See also category: Out of Africa in this blog. And specially, besides the links in-text, this entry on the various options for the OoA migration, which are necessarily much older than this group.