There is a new major paper at arXiv on Southern African autosomal genetics, with emphasis on pre-Bantu aboriginal peoples (usually known as Khoisan, even if the phylogenetic unity of their languages is not anymore accepted).

The hunter-gatherer populations of southern and eastern Africa are known to harbor some of the most ancient human lineages, but their historical relationships are poorly understood. We report data from 22 populations analyzed at over half a million single nucleotide polymorphisms (SNPs), using a genome-wide array designed for studies of history. The southern Africans-here called Khoisan-fall into two groups, loosely corresponding to the northwestern and southeastern Kalahari, which we show separated within the last 30,000 years. All individuals derive at least a few percent of their genomes from admixture with non-Khoisan populations that began 1,200 years ago. In addition, the Hadza, an east African hunter-gatherer population that speaks a language with click consonants, derive about a quarter of their ancestry from admixture with a population related to the Khoisan, implying an ancient genetic link between southern and eastern Africa.


Unlike most other African (or global) genetic studies, here the Southern African natives are not undersampled and that way a more realistic genetic structure, with Khoisan peoples occupying their distinct position in the overall human structure, is more evident.

Selected images (from the supplementary material):


Locator map and legend for all PCA graphs: 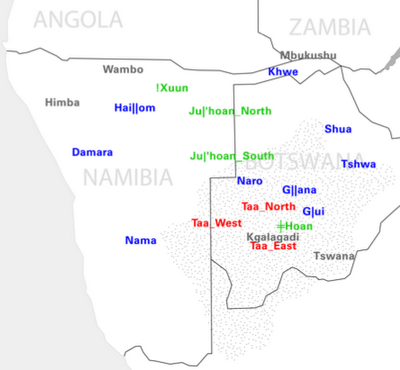 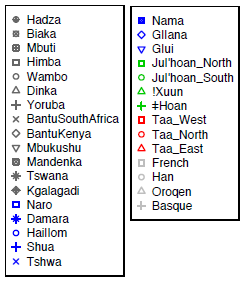 Color code is as follows: 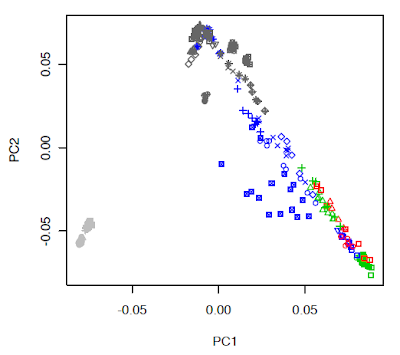 The PC1 sets apart Khoisan (specially the Kx'a and the Tuu) from Eurasians, while the PC2 defines the non-Khoisan African dimension (including some Khoisan, specially the Damara). 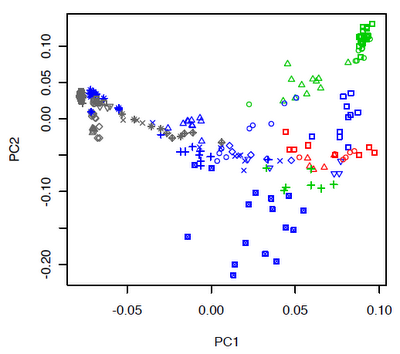 Excluded Eurasians, the PC1 is taken by the Khoisan-other African dialectics, while the PC2 contrasts the Ju|'hoan versus the Nama specially.

Interestingly enough, here the Damara and the Himba contrasting with other Africans, specially the Dinka, take over PC2. Meanwhile PC3 is monopolized by the contrast between Ju|'hoan and the ǂHoan.

As in most previous PC analysis (excepted African PCA 2-3) the most neatly distinct Khoisan populations are the Kx'a (green cluster) and Tuu (purple one). At K=6, two other clusters are taken by the two distinct Pygmy populations, while the fifth one describes Eurasians (or West Eurasians). The remainder indistinct African is shown as blue component but it seems to hide important substructure in fact.

Arguably K=5 may be a better description, or at last one we are more familiar with: differentiating between Khoisans (green), Pygmies (orange), Hadza (purple), other Africans (blue) and Eurasians (red). But something of the order of K=13 or 16 is probably a better description in any case for such a varied bunch.