In brief: it suggests Iberian-like and Russian-like origins for two different Neolithic populations of Scandinavia.

The farming way of life originated in the Near East some 11,000 years ago and had reached most of the European continent 5000 years later. However, the impact of the agricultural revolution on demography and patterns of genomic variation in Europe remains unknown. We obtained 249 million base pairs of genomic DNA from ~5000-year-old remains of three hunter-gatherers and one farmer excavated in Scandinavia and find that the farmer is genetically most similar to extant southern Europeans, contrasting sharply to the hunter-gatherers, whose distinct genetic signature is most similar to that of extant northern Europeans. Our results suggest that migration from southern Europe catalyzed the spread of agriculture and that admixture in the wake of this expansion eventually shaped the genomic landscape of modern-day Europe.

I don't have access to the paper as such but the substance seems to be, as so often, in the supplementary materials, which are freely available (direct PDF link). 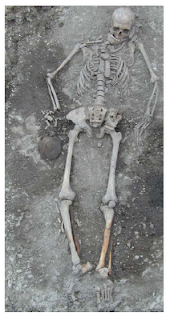 The study analyzes the autosomal genetic signature of four prehistoric Swedes from the Neolithic period. Three are from Götland and belong to the regressive (neo-hunter, forest Neolithic) Neolithic culture of Pitted Ware, which has its roots probably in the Neolithic of Eastern Europe (Dniepr-Don culture). While they have been used as proxy for Paleolithic peoples, the comparison is not really valid: they were probably recent immigrants from Eastern Europe (or admixed with the Paleolithic locals maybe) with a Neolithic background although, because of the peculiarities of the Baltic frontier, they were not much into farming (it seems), although they did keep pigs.

At the right, meet what is left from one of them, known as Ajvide 70. We can see some of the characteristic burial traits common in Pitted Ware culture but also in their apparent ancestors from Dniepr-Don culture (farmers): burial in extended position with ochre (visible at the legs in this case).

The fourth one is from South-Western Sweden, near Göteborg and is consistently described as "farmer". This individual belonged to the Megalithic cultural phenomenon (or more properly Dolmenic Megalithism, as there are some megalithic structures that may not be related or only tangentially so) that began in SW Iberia c. 5000 BCE and which is characterized by collective (clannic?) burial in dolmens, where the older burials were pulled aside to make room for the new ones. They also buried their people in extended position although the use of ochre is less common.

Dolmenic Megalithism extended since the fourth millennium (at least a thousand years after it was conceived in SW Iberia) through much of Atlantic Europe, being these settlements of Southern Sweden in their further North-Eastern reach (together with Denmark and much of Low Germany). Later, after the loss of those areas to the Indoeuropeans of Kurgan cultural background (Corded Ware) the phenomenon would also expand into the West and even Central Mediterranean (North Africa, Italy)... but that's another story.

Both burial traditions stand in contrast with those of the Neolithic cultural arrivals from the Balcans (and possibly earlier from West Asia), the Balcano-Danubian tradition and the Cardium Pottery one of most European Mediterranean areas, which practiced burial in flexed or fetal position.

So let me emphasize my point: both groups studied here are Neolithic but both belong to cultures which are not exactly what we could describe as "core Neolithic" but rather cultures that appear to have at least partial roots in Paleolithic Europe: one from the East and the other from the Southwest and later all the West.

Interestingly the autosomal genetics of these two groups are consistent with what I just outlined: the Pitted Ware people resemble Eastern Europeans, while the Megalithic farmer clusters best with Iberians and other SW Europeans.

Visually (all from the supplemental materials):

We can see that the dominant component of the Megalithic farmer is orange, which is dominant in Sardinia but almost lacks the yellow component dominant in West Asians (and to lesser extent North Caucasus and Italy). The not compared Iberians could be a good match as we can see below.

Two of the three Pitted Ware individuals cluster best with Russians, while the third does instead with some Finnish maybe.

The main difference with modern populations in general is that the yellow (West Asian) component is residual, exactly as happens among modern Basques, Sardinians and Finns, which may have been rather isolated all this time. 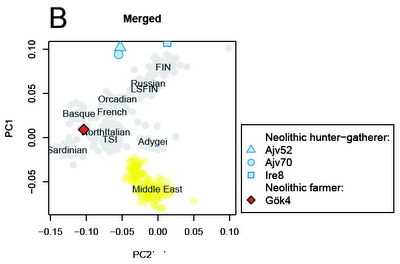 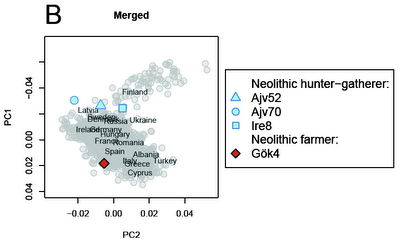 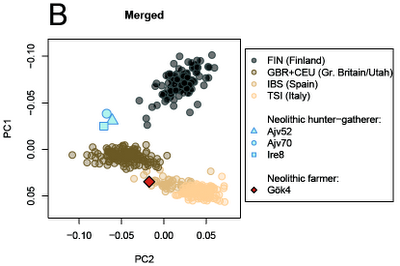 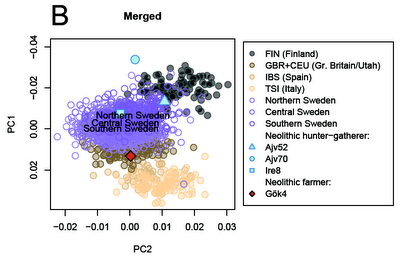 Judge yourselves because these comparisons are never 100% conclusive, but my impressions is that the Megalithic farmer (red) clusters mostly with Iberians, except in the last graph where it does with the British-CEU sample.

The Pitted Ware samples (cyan or sky blue) are less precise (they are three after all) but where Eastern European samples other than Finnish are available for comparison, they tend to cluster with them (or between them and Sweden and Finland). In the last panel, where Swedes have been oversampled and non-Finnic Eastern Europeans removed, Ire8 and Ajv52 cluster withing modern Northern Swedes, while Ajv70 is anomalous.

So I do not think that the conclusions publicited in the press release (which are probably also those of the paper) can be taken at face value but rather with a good pinch of salt: the factual data seems to suggest that the genetics of these prehistoric people are quite related to that of modern Europeans from Scandinavia, Eastern and Western Europe. The comparison cannot be expected to produce identical individuals because, no matter how hard we might try or how much we may owe them in a sense, we are not our ancestors.
Posted by Maju at Friday, April 27, 2012