Echoes from the Past (Oct 14) - the genetic isolation of humankind

I'm planning an entry on Paleolithic and Neolithic navigation but meanwhile, here it goes some stuff (mariner or not) that I find interesting.
Homo genus became genetically isolate thanks to natural spermicide

A critical change in a immune system molecule, from Neu5Gc to Neu5Ac, made our ancestors effectively isolated from our cousins from the Pan genus and probably also from the then common australopithecines.
This change would simply kill any non-human sperm in the uterus or, would it manage to succeed, the resultant fetus. This incompatibility with other hominins may have been critical in the process of speciation of the first Homo species such as Homo erectus, Homo habilis or maybe A. sediba.
··> Science Daily, Darius Ghaderi et al. at PNAS (PPV for six months or freely accessible in some world regions).
Human thumb (Neanderthal or H. heidelbergensis) found in Sardinia

The finding of a thumb bone in Sardinia, dated to 250-300,000 years ago, may help break the fantasy of ancient humans not being able to navigate. This finding adds to those of Crete (c. 190 Ka ago and the famous Flores hominin), all of which must have crossed vast spans of sea in order to get to their destinations, implying at least some level of navigation.
··> BioScholar, NeanderFollia[cat]
In the discussion at NeanderFollia, David indicated further evidence of archaic navigation I was unaware of: H. erectus must have reached Flores c. 900,000 years ago, in what is probably the most ancient navigation feat we can confirm ··> John Hawks, Environmental Grafitti, Adam Brumm et al. at Nature (PPV).
Also there is at least some uncertainty of H. ergaster or some other human species maybe crossing to Europe via the Strait of Gibraltar at similar dates as in Flores or maybe even earlier, but, because of the various possible routes involved this is less conclusive. Instead, Flores, Sardinia and Crete have not been connected to the mainland at any time in the biological history of the genus Homo.
Art workshop found in South Africa
A number of shells with indications of having held ochre have been found in the important site of Blombos Cave, South Africa. The shells had holes which suggest that they were used as containers. Other tools, such as hammers and knives, to work the clay, have also been found. 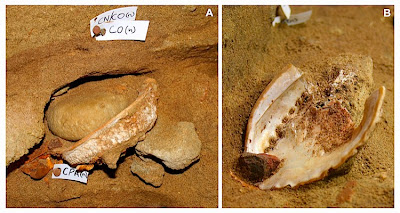 ··> Pileta de Prehistoria[es], Christopher S. Henshilwood at Science (PPV).
Babies know justice instictively
While actual perception and interest on fairness varies, a good deal of human babies (15 months old) clearly show interest in fair sharing and will actively share. Other babies have less interest in fairness however but they will share anyhow, even if in a less generous manner.
··> Science Daily, Marco F. Smith and Jessicca A. Sommerville at PLoS ONE (open access).
Malaria research casts doubt on mitochondrial DNA 'molecular clock'

It seems that the molecular clock is not on streak. Recently it was radically challenged for Y-DNA and it seems obvious that it will not survive in general, at least without radical revisions. A crucial assumption for the molecular clock hypothesis is that the clock ticks regularly or almost so.
Well, it does not seem to be the case of mtDNA either: certainly not for the primate parasite Plasmodium sp.

The use of fossils from the host as absolute calibration and the assumption of a strict clock likely underestimate time when performing molecular dating analyses on malarial parasites. Indeed, by exploring different calibration points, we found that the time for the radiation of primate parasites may have taken place in the Eocene, a time consistent with the radiation of African anthropoids. The radiation of the four human parasite lineages was part of such events.

··> M. Andreina Pacheco et al. at BMC Evolutionary Biology (open access).
Celtic astronomical kurgan found in Germany
Dated to the 7th century BCE, the plan of a burial mound (or kurgan) of the Hallstatt period in the early Celtic area of Southern Germany has been reported. Allegedly the disposition of the wooden posts around the mound inform about the astronomy of the Moon, primarily, and the Sun and they may even describe constellations.
··> Science Daily.

Millán Mozota denounces at his blog, echoing other researchers, the short-sighted attitude of the Cantabrian authorities who have decided to open the Altamira cave to the public again in spite of the dramatic risk for the art in it.

In the last decade, considerable attention has been paid to the deterioration of the caves that house the world's most prominent Paleolithic rock art. This is exemplified by the caves of Lascaux (Dordogne, France) (1) and Altamira (Cantabria, Spain), both declared World Heritage Sites. The Altamira Cave has been closed to visitors since 2002. Since 2010, reopening the Altamira Cave has been under consideration. We argue that research indicates the need to preserve the cave by keeping it closed in the near future.

The public can enjoy a replica of part of the cave at the nearby museum.
··> El Neandertal tonto, ¡qué timo![es], Cesáreo Saiz Jiménez et al. at Science (PPV).
Iberian Neolithic idols
While in Spanish language, I can't but call your attention to this fifth article of Neolítico de la Península Ibérica on the diverse array of idols known from the Neolithic and Chalcolithic of Iberia. Even if you can't read any Spanish, you will no doubt gather some information and visual recreation from simply watching the many images and maps included in this blogpost. For example: