A lot of stuff that I won't probably dedicate more time nor space (sadly enough in some cases at least): 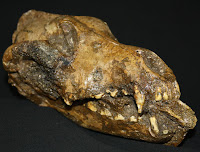 Children made rock art in Rouffignac ··> The Heritage Journal.
Basque chasm captured sample of late UP animals. The "Kiputz IX trap" near Deba was a death sentence for 48 deer, 23 reindeer and 18 steppe bisons, none of which show any sign of human consumption. The best preserved skull is that of a male bison (right). The site is dated to c. 19-18 Ka ago, in the Solutrean period ··> Gara[es].


20,000 years ago Azrak (Jordan) was a fertile inhabited region and the first one to bury people in crouched position, it seems ··> MENA.

Girl's tomb found near henge in Kent ··> The Heritage Journal.

Project to dig islands around Britain to establish origins of Neolithic ··> PhysOrg, Irish Weather Online.
Iruña-Veleia: map shows there were two Veleias. Veleia Gori [VIIL(II)I(A) GORI] and Veleia Nova [VIILIII NOVVA.]are mentioned in a stone map of the Basque-Roman town ··> Iruina[es] (also here).
I'd speculate that GORI (a word that also appears in other inscriptions) might be goiri (upwards and attested as surname modernly) it could be also goren(a) (of the high, or something like that). Previously it had been supposed to mean gorri (red) because it appeared along with other color names, who knows?

Human genetics and biology:
Extremely pale people may not be getting enough sun without burning (and hence may benefit from extra fish in the diet or industrial supplements) ··> SD.
Claim, based on mtDNA, that major population expansion in East Asia is pre-Neolithic ··> Hong-Xiang Zheng et al. at PLoS ONE (open access).


Solar system once had fifth gas planet, but was expelled ··> PhysOrg

Can primordial black holes be the elusive dark matter ··> PhysOrg.

Magic mushrooms (Psylocybe sp.) can impact certain personalities for the better, while being trivial for others ··> Psychedelic Research, SD.

Can neutrinos be faster than light? ··> Nature.