Remember that last Christmas we got an unusual gift of knowledge in the finding by Reich et al. that Melanesians of all modern humans researched back in the day were the only ones to show admixture with the mysterious Denisova fingers?
Remember that I said already back then that this admixture was not with Denisovans as such but a related species (probably H. erectus) of which the Denisova hominings were just the tip of the iceberg and a Neanderthal-admixed tip actually.
I proposed therefore that the admixture shown by Melanesians but not continental Eurasians was probably the product of admixture with H. erectus solensis (or something like that) in Indonesia, while 'Denisovans' were hybrids of H. erectus and H. neanderthalensis, possibly at near 50% levels.
I suggested then this scenario: 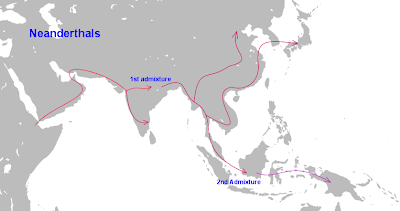 With the 2nd admixture representing this regional H. erectus introgression and the 1st one being that from Neanderthals or maybe a related Heidelbergensis-derived population in South Asia (Hathnora hominin).
I also said that the figures of 'Denisovan' admixture had to be cut by half because the authors were counting Neanderthal admixture twice in Melanesians (as 'Denisovans' were probably Neanderthal-Erectus hybrids). Quoting myself:

They suggest (supp. info 8) that Melanesians would have as much as 7.4% of admixture with archaic species: 4.8% Denisovan plus 2.5% Neanderthal. But, if Denisovans are hybrids of H. erectus and H. neanderthalensis (as seems most likely, see above), then the real admixture with H. erectus would be an undetermined percentage but always less than 4.8%. As we know that the Neanderthal (or Heidelbergensis) component is 2.5%, it is most likely that the actual Erectus admixture in Melanesians is of only 2.3% or 2.4%, totaling 4.8%.

Now we are told that all the aboriginal peoples of Near Oceania, plus Wallacea and Filipino Negritos, show that admixture at similar or lower levels:
D. Reich et al., Denisova Admixture and the First Modern Human Dispersals into Southeast Asia and Oceania. AJHG 2011. Pay per view (free in six months).
I could browse the paper a day or so ago, so I hoped this was an open access paper. Yet today I find it is PPV. Luckily Dienekes has published most of the relevant graphs at his blog.
In any case the relevant information is this map (from Neanderfollia[cat]): 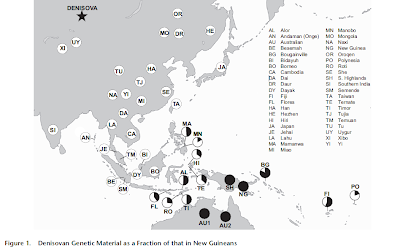 It tells us that Papuans and Australian Aborigines share the greatest fraction of 'Denisovan' introgression, followed by Boungaville Melanesians, Fijians, Timorese, Alorese and Mamanwa speakers (probable Ati). These and other peoples of beyond what used to be the continental landmass of Asia in the Ice Age, retain some level of 'Denisovan' admixture.
But Denisova is very far away and no admixture is known elsewhere. Why? Because the admixture surely happened in or near Indonesia and was not with the Neanderhal-hybridized Denisovans but with pure H. erectus from the region.
Papuans and Australian aborigines have probably 2.4% admixture from H. erectus, in people like the Timorese that would be 1.2% and in a group like the Roti (RO) it is of just 0.6%. That's my interpretation of the available data.
But from Sundaland to the West and North there is no such admixture: zero!
And that can only be explained if the admixture happened in Indonesia, maybe in Flores?
Posted by Maju at Saturday, September 24, 2011