The following paper offers some information on the genetics of Provenzals and some specific populations of Turkey (Foça, Izmir) which is compared with older studies (on Turkey and Greece) to reach quite unfathomable conclusions:
Roy J. King et al., The coming of the Greeks to Provence and Corsica: Y-chromosome models of archaic Greek colonization of the western Mediterranean. BMC Evolutionary Biology, 2011. Open access.
I'm split on this paper: on one side it does provide some interesting data and makes some common sense claims (like Provence having been little affected by Neolithic expansion direct colonization) but then you stumble upon absurd ideas, such as Cardium Pottery stemming somehow from "Anatolia":

There is absolutely no reason to be looking at Anatolia: the Neolithic wave that arrived to Provence did not originate in Anatolia but in the Western Balcans. It is very possible that Anatolia was the ultimate origin of Greek Neolithic and this was in turn at the origin of Cardium Pottery Neolithic somehow, but the real origin of the Neolithic wave that arrived to Provence must not be looked for in any case in Western Anatolia - that is a total nonsense.
We know way too little as of yet to explain the exact process of cultural transference from West Asia (Anatolia specially) to the Balcans (Thessaly in particular) and from Thessaly to the Adriatic, where the cultural elements are so distinct anyhow. There is no particular reason to expect any arrival directly from Anatolia into Italy or SW Europe in the Neolithic. Any such migration would have been dampened in two filters: one in Greece and another one in the Adriatic Balcans.
From my ongoing (and slow) work of summarizing  European Neolithic in maps: 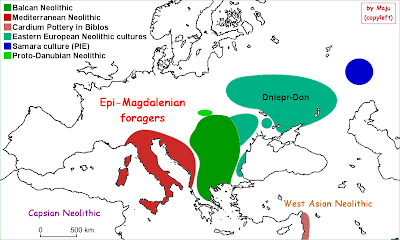 Here you can see in brown the first area of Cardium Pottery Neolithic: Dalmatia, Montenegro, Coastal Albania, most of Bosnia, Italy (in a second moment)... It has a precedent in Otzaki (Thessaly) and a derived influence in Biblos (Lebanon) but by no means can it be linked to "West Anatolia" of all possible places.
Universities and grants should require that any geneticist doing historical population genetics hire a prehistorian for assessment, sincerely.
Still there is a very interesting amount of data that is of interest, summarized (as I said before) in figure 2 specially. This is an extensive table that I cannot reproduce here with enough resolution without some previous work. So for reason of its relevance and novelty I'll focus on the Y-DNA data of Provence (n=51, only attested lineages shown):
Up 26 to 30% (depending on how you evaluate I2*) of the genetic pool is "Eastern Mediterranean" in Provence. E1b1b1b1a2 (V13) is probably from Albania or other Adriatic areas (see Battaglia 2009). That can also be argued to be the case for all the other "transmediterranean" lineages, which agrees well with a Neolithic origin of all them. However it is not impossible that these Neolithic arrived in batches and with intermediate stops in Italy for example or, why not, in Phocaea in some cases.
But the research falls very short from demonstrating what they claim to demonstrate. If they have demonstrated something at all they have failed to explain it properly. So the only interest of this paper is the raw data, which adds to other such data to be integrated into a careful and comprehensive exploration of all (and not just some) data with proper prehistoric assessment.
It is in any case important to understand that under the Neolithic colonization hypothesis, E1b1b1a2 should not be expected to originate neither in Anatolia nor in Greece but in Albania, Montenegro and Dalmatia. And, if anything, in Greece rather than Anatolia. Attributing European Neolithic directly to Anatolia or West Asia in general is not an acceptable assumption but a wacko fetish that should be discarded altogether.
Posted by Maju at Tuesday, March 15, 2011