Some curious archaeology news from the Atlantic Islands

Found via Archaeology in Europe and quite worth a mention here, I believe: 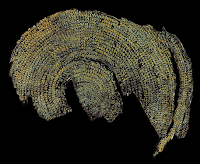 A Chalcolithic Age (late Neolithic by British standards) handbag preserved in bog. The piece of basketry to the left was part of a very extended design used by people, usually women, through the World since at least Neolithic times. The first such design is claimed to be from West Asia c. 4800 BCE, while this Irish specimen (from Tyford, Wesmeath) seems to have "only" 5000 years of age.
Full story at Irish Times.
Of similar age, 5500 years, is the first complete Neolithic (Chalcolithic by pan-European chronology) pot  found in Britain. The site of Didcot in Oxfordshire has also yielded well preserved Iron Age housing and other materials.
Full story at BBC.
Finally big myths are being shaken: Romans may not have built "Roman roads" after all. Iron Age Britons were already building them long before the Romans arrived. If that was the case in the then rather remote island, I presume it's probably also in other parts of Europe.
The Independent wonders, quite legitimately, what did the Romans do for us (if they did not build our roads)? In truth the notion of the Roman Empire as a force of culture and civilization may well be very much misplaced, after all, Romans learned everything but war from their Etruscan neighbors.
Posted by Maju at Saturday, March 12, 2011