Mundo Neandertal[es] informs us today that of the discovery of evidence of food processing, specifically grain and rhizome milling, by Paleolithic Europeans some 30,000 years ago. 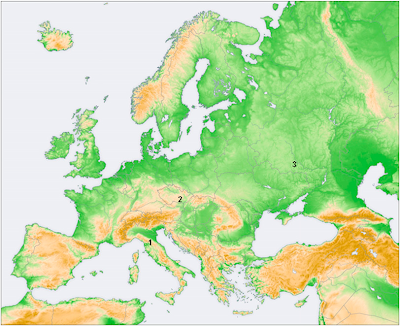 The three sites where this activity has been documented are Billancino in Italy (1), Pavlov-VI in the Czech Republic (2) and Kostenki-16 (Uglyanka) in Russia (3). They belong to the Gravettian and Gorodtsovian cultures (Gorodtsovian is the most "modern" culture at Kostenki, the one with needles, see here and here).
This is not at all the oldest evidence of food processing or milling anyhow, the record corresponds to a Mozambican sites of the Middle Stone Age, some 105,000 years ago. Still it illustrates by means of factual evidence that Paleolithic Europeans already used technologies that would allow them to have some short-term reserves and easy to transport high caloric food such as breads.
Ref. Anna Revedin et al.,  Thirty thousand-year-old evidence of plant food processing. PNAS 2010. Pay per view (depending of where you are and when you try to access - supp. materials freely available).
Posted by Maju at Wednesday, October 20, 2010