Since I started reading about the MSA (Middle Stone Age, the main African Middle Paleolithic stone industry) I have been under the impression that it had Solutrean affinities.
Well, now it is confirmed that at least some MSA crafters, those from Blombos Cave, South Africa, effectively used this technique some 35,000 years before it was known in Europe.
Vincent Mourre et al. Early Use of Pressure Flaking on Lithic Artifacts at Blombos Cave, South Africa. Science 2010. Pay per view.

Pressure flaking has been considered to be an Upper Paleolithic innovation dating to ~20,000 years ago (20 ka). Replication experiments show that pressure flaking best explains the morphology of lithic artifacts recovered from the ~75-ka Middle Stone Age levels at Blombos Cave, South Africa. The technique was used during the final shaping of Still Bay bifacial points made on heat-treated silcrete. Application of this innovative technique allowed for a high degree of control during the detachment of individual flakes, resulting in thinner, narrower, and sharper tips on bifacial points. This technology may have been first invented and used sporadically in Africa before its later widespread adoption.

Very few stones types (obsidian, jasper, high quality flint) can be retouched this way without previous thermal modification (heating the stone appropriately). This was the technique used at Pinnacle Point, not far from Blombos in that very same time. The technological sophistication is such that it has been compared to metallurgy.
While Pinnacle point offered the first evidence of stone preparation through heating in order to improve knapping, Blombos has the first one of pressure retouch. Other evidence of the so-called modern behavior (symbolism, art, etc.) is also abundant in the South African MSA. Even food processing is known from that time in nearby Mozambique.
Source: Science Daily.


A cast of a Solutrean "laurel leaf" spear point, over 13 inches long. These delicate and beautiful implements were prepared by delicate flaking across the surface. Many are so large and delicate that they could never have been actually used, and may have been status objects.


VOLGU LAUREL-LEAF POINTS (CASTS) - SOLUTREAN PERIOD
LE VOLGU - EASTERN FRANCE - UPPER PALEOLITHIC PERIOD
Francois Bordes wrote that "The majority of these specimens (Volgu cache) were chipped by direct percussion; but for the finer ones, indirect percussion or pressure has been used." Jacques Bordaz wrote that "The obvious fragility of some of the specimens (Volgu cache) suggest rather a ritual use, or perhaps they were simply examples of some knapper's bravura." 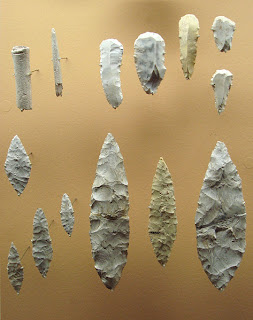 A more complete toolkit from Solutré-Pouilly.

Another culture that used the same technique later on was Clovis culture in Holocene North America.
Posted by Maju at Saturday, October 30, 2010