This week we got to know a lot more about the genetics of ancient West Asians, from the Mesolithic, Neolithic and later times. All in a single major study:

We report genome-wide ancient DNA from 44 ancient Near Easterners ranging in time between ~12,000-1,400 BCE, from Natufian hunter-gatherers to Bronze Age farmers. We show that the earliest populations of the Near East derived around half their ancestry from a 'Basal Eurasian' lineage that had little if any Neanderthal admixture and that separated from other non-African lineages prior to their separation from each other. The first farmers of the southern Levant (Israel and Jordan) and Zagros Mountains (Iran) were strongly genetically differentiated, and each descended from local hunter-gatherers. By the time of the Bronze Age, these two populations and Anatolian-related farmers had mixed with each other and with the hunter-gatherers of Europe to drastically reduce genetic differentiation. The impact of the Near Eastern farmers extended beyond the Near East: farmers related to those of Anatolia spread westward into Europe; farmers related to those of the Levant spread southward into East Africa; farmers related to those from Iran spread northward into the Eurasian steppe; and people related to both the early farmers of Iran and to the pastoralists of the Eurasian steppe spread eastward into South Asia.

This graphic shows pretty well how the ancient populations of West Eurasia are expressed as a mixture of those four founder populations: 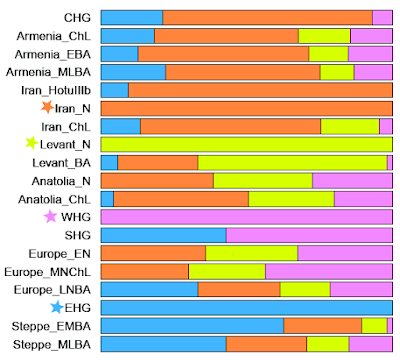 That is if you can get through the nomenclature, which is inherited in many cases from a long array of recent studies. I'm not even sure myself in many cases what samples exactly and where from are thrown in each category. But the most important part is that Iran_N and Levant_N are the two Neolithic-specific founder populations of the Fertile Crescent (yeah, N stands for "Neolithic", not "North") and that the other two founder populations from pre-Neolithic Europe are WHG (Epi-Magdalenian peoples from Western and Central Europe) and EHG (Eastern European hunter-gatherers, of Epigravettian culture and maybe even proto-Uralic in one case).

Then we see in the case of Europe how:

1. Anatolia_N (precursors of mainline European Neolithic) are a mix of both West Asian farmer groups, plus a sizable fraction of Western Paleo-european ancestry already.

2. This fraction of Western Paleoeuropeanness increases as the farmers expanded into Europe (EN) and then as there was probably some backflow of Western origins in relation to Megalithism and Bell Beaker (MNChL). But in general remains the same basic genetic composition and in no known case incorporates any Eastern Paleoeuropean component at all, not yet.

3. It is only with the Indoeuropean ("Kurgan") invasions reflected in the category LNBA, when the EHG component begins feeling very important in Europe. If I'm correct, all those samples are from Germany other areas of Central and North Europe, with the Iberian and Italian ones of similar chronology placed in the MNChL tag instead. The LNBA/MNChL contrast is not a strictly chronological analysis but an analysis by categories of ancestry that do overlap in time.

4. In Armenia instead, we see a decrease of the minor EHG component but then an increase in the MLBA ("middle and late Bronze Age") when Armenians arrive from the Balcans and Phrygia, conquering the pre-existing Hurro-Urartean peoples (whose language was probably related to Chechen and other NE Caucasian languages), which should correspond to the formation of Urartu and more specifically to the Hayasa-Azzi and Shupria stages, both considered Urartean (Hurrian). The WHG and Levant-N components we see since the Chalcolithic is similar to what we see in West Anatolia and probably reflect interactions corresponding to Central-Eastern Anatolia, Kurdistan and Syria, for which we have no direct ancient data yet.

Ancient samples (colored and labeled) projected on a PCA of modern West Eurasian populations (in gray): 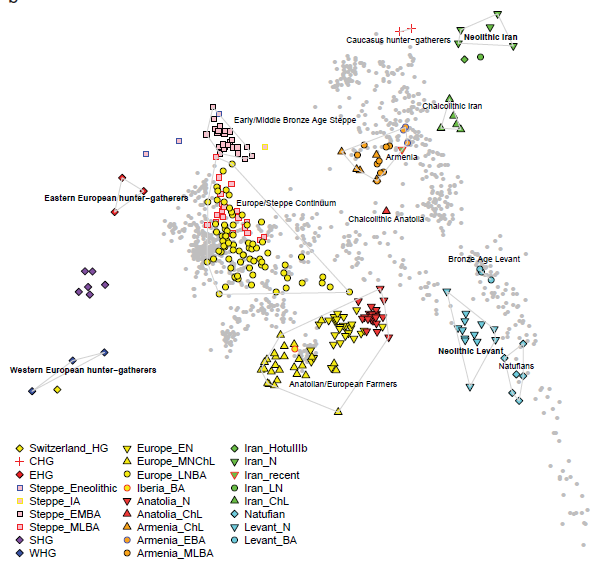 For a reference on which are the modern populations in gray, a good reference is this older but fully labeled PCA by Olalde.

Briefly: Natufians fall on top of modern Palestinians, their slightly admixed Neolithic descendants fall between Palestinians and Jews, Middle Neolithic European Farmers fall on top of Sardinians, the so-called Europe-Steppe continuum (early Western Indoeuropeans) fall between Central Europe, France and the Balcans, most Western Europeans do not overlap with ancient samples but appear to have even greater Paleoeuropean admixture instead, etc.

CT is the main pan-Eurasian macro-haplogroup and is not informative, except in Palestine because it implies exclusion of E.

Otherwise we see an important presence of E (mostly E1b1b) a lineage we know was carried by early farmers into Europe and that has ultimately African origins. It probably indicates migration of NE Africans into Palestine in the Mesolithic, something also supported by Archaeology. However these NE Africans were surely already mixed with Eurasian ancestry, which probably arrived to the Nile Basin in the early LSA, some 50-40 Ka ago. So it's a complex story of multiple admixture events in the continental crossroads that is Egypt and also Palestine and other nearby areas.

We also see G2a1 in Late Neolithic Iran, and this one is the main lineage brought to Europe by the early farmers if we are to judge on known ancient sequences (today it is not more important that E1b but it is maybe more evenly distributed). However we only see it in the Late Neolithic, so it may have originated further west.

We see too little J, only J(xJ1a,J2a1,J2b) in Chalcolithic Iran and in Bronze Age Jordan: J(xJ1,J2a,J2b2a) again and J1(xJ1a). I guess that a lot remains to be researched on this issue because J is by far nowadays the most common haplogroup of West Asia, and also impacted Europe and South Asia (J2) and North and NE Africa (J1).

On the issue of "Basal Eurasian": African or West Asian?

The question remains unanswered, as I said before but there are two clues: on one side the presence of E1b in Mesolithic and Neolithic Palestine clearly supports a direct NE African influence, also backed by archaeological evidence. But there is some nuance in the issue of FST distances that I want to highlight.

The distances are available in a very extensive supplementary table, so I took just a few to get a better understanding, not only of this issue but in general of the genetic distances of the four founder populations:

Quite ironically it is not the Natufians who are the closest to the African reference population (Yoruba) but the CHG, Iran-N and Levant-N groups. In fact the Natufians are the most distant ones after the WHG population. However this is tricky because the affinity to Yoruba may also be caused by the "ghost" Basal Eurasian population, claimed first of all by Lazaridis 2014, which would be a remnant of the Out of Africa Migration (not strictly African but close enough and impossible to discern from true African admixture in most analyses).

So we may imagine that the "Highlander" (CHG and Iran-N) populations were somehow influenced by that Basal Eurasian ghostly population, which might have survived in the Persian Gulf oasis, for example. Or whatever else.

The presence of the same or similar element in Levant-N reflects possibly admixture with Iran-N or a similar population, something that is implicit in the table above but I'll address below more explicitly.

If there is (and there must be, because of Y-DNA E1b) some African admixture in the Natufian population, it was very diluted already in the autosomal (general DNA) aspect before farming began.

Update (Jul 2): all the four paragraphs above are possibly misleading to some extent because, as several commenters have rightfully pointed out, generic drift alone just causes the effect of increased distance to general reference populations like Yoruba and Han, this genetic drift is caused by relative isolation, so it seems that Magdalenian Europeans (WHG) and Natufian Palestinians (Natufian) were both more isolated populations in general terms than the Iran-Caucasus-Eastern Europe ones, whose sheer numbers apparently kept them more similar to the generic root of Humankind, less endogamous.

However, per archaeology, such "sheer numbers" are not to be expected in that area, rather the opposite (Western Europe and Palestine are much more richer areas in terms archaeological, suggesting denser populations). So the question remains open as far as I can tell but it should be discerner with more precise tools than mere FST.

A visual of smallest genetic distances between (each "-" represents 0.01 in the table above):

Neolithic peoples of West Asia, even if different, are closer among them than their pre-Neolithic precursors.

The distances between Natufians and everyone else are comparable to those with Han Chinese, however only in the case of the populations that appear to have extra affinity to East Asia (Iran, Caucasus and Eastern Europe), otherwise it is smaller.

All four populations were distant enough from each other to be considered clearly distinctive. Even EHG and WHG were quite dissimilar.

There is much greater similitude between Iran and Levant Neolithic peoples than between their Mesolithic precursors. This implies some sort of intense admixture as agriculture and herding developed. Not enough to erase the differences but enough to blur them significantly.

Genetic influence from East Asia or a related population is also apparent in all Northeastern populations but even more so in Iran Neolithic. Why?

There is much more in the study and supp. materials but I can only review so much.
Posted by Maju at Sunday, June 26, 2016