Mexico harbors great cultural and ethnic diversity, yet fine-scale patterns of human genome-wide variation from this region remain largely uncharacterized. We studied genomic variation within Mexico from over 1000 individuals representing 20 indigenous and 11 mestizo populations. We found striking genetic stratification among indigenous populations within Mexico at varying degrees of geographic isolation. Some groups were as differentiated as Europeans are from East Asians. Pre-Columbian genetic substructure is recapitulated in the indigenous ancestry of admixed mestizo individuals across the country. Furthermore, two independently phenotyped cohorts of Mexicans and Mexican Americans showed a significant association between subcontinental ancestry and lung function. Thus, accounting for fine-scale ancestry patterns is critical for medical and population genetic studies within Mexico, in Mexican-descent populations, and likely in many other populations worldwide.

First of all it has to be highlighted that the sentence "some groups were as differentiated as Europeans are from East Asians" is a bit misleading. It refers to the raw FST parameter (Fixation Index) which in these cases is caused by extreme drift, product of isolation and small number endogamy.

Otherwise the Seris (Comcaac), who are the only population affected by the claim, are clearly derived not only from the same root as the rest of Native Americans but more specifically from the ancestor population of the Tarahumaras (Rarámuri), as fig.1-D reflects (right).

The Seris are a small population of coastal Sonora who add up to less than one thousand people and have remained proudly distinct, not only from the colonial population but also from other fellow Native Americans. In spite of this long extreme isolation that makes the appear "as differentiated as Europeans are from East Asians", it is apparent that they must derive from the Uto-Aztecan populations of NW Mexico (and maybe also across the border).


Other very isolated and heavily drifted populations are the Lacandon and Tojolabal Mayas. Again, in spite of their radical isolation, they seem related to other Mayas by origin. In these cases their languages are recognized as members of the Maya family, while the Seri language is considered an isolate.

This reference is interesting because it explains how subcontinental levels of differentiation can happen in relatively short time if the founder populations are small and isolated for some 20 Ka. It is a warning call against reaching to too many conclusions based only on populations with a long history of isolation.

The tree is interesting also because it suggest a main division separating the Nahuas from the rest of the Uto-Aztecan meta-population (Saris included). The Nahuas, who approximately correspond to the the ancient Aztecs, are actually divided in several groups, which seem rather akin to their immediate neighbors and not so much among them or their linguistic relatives.

This implies that, as the ancestors of the Nahuas migrated southwards, they assimilated so many locales that they largely lost their distinctiveness. In the ADMIXTURE graph to the left, we see that they do keep a variably small fraction of Uto-Aztecan affinity (not just them, also the Purepecha and Totonac, whose languages are distinct).

Otherwise Mexican Natives have two main components at K=9: the main Mexican one (blue) and the Maya one (orange). The Maya division is also apparent in the tree.

However it must be mentioned that the ADMIXTURE run available in the supp. materials (fig. S-10) reaches down to K=20, showing further differentiation between the various Mesoamerican populations dominated by the blue components at K=9.

For comparison, in the European segment only the Basque component shows up as distinct in all those runs (since K=10). So we are talking about a fairly diverse population compared with European relative homogeneity.

Sequence of further components or distinctions showing at depths greater than K=9:


An issue worth mentioning, particularly in relation to the so far unconfirmed but quite plausible Canarian origin of a large share of the "European" ancestry in the Caribbean region, is that the European ancestry of Mexicans seems essentially Iberian, as shown in fig. S-14: 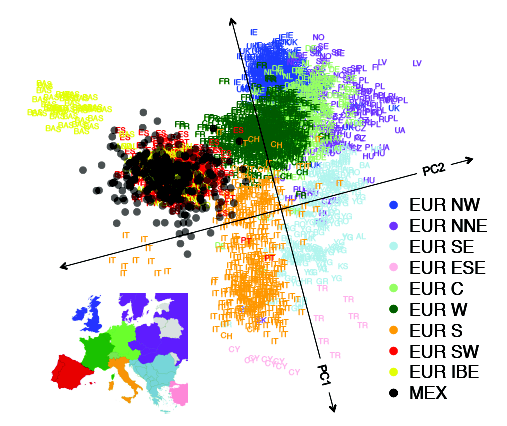 I am anyhow awaiting for a sensible geneticist to address this question properly. When dealing with Mexicans and other Latin American populations of complex colonial ancestry, it seems quite apparent that so diverse European samples are in excess and that instead a North African control is surely missing instead.

A more regionalized approach to Iberian ancestry could also be interesting.

Regarding the Native American share of the ancestry, a finding of this study is that there is important regional variation: Yucatan and Campeche Mexicans have clearly strong Maya ancestry, while in Sonora it is something more like Tarahumara and in the core of Mexico it seems Nahua-like or from other "central" populations like the Zapotec or Totonac. See fig. 2A for details.

There is also very minor Tropical African ancestry across the board, somewhat more relevant in Guerrero and Veracruz, states which historically hosted the main port cities of New Spain and still have some small Afrodescendant populations.
Posted by Maju at Sunday, June 15, 2014