First ever bronze was smelt in the Balcans

It seems that West Asia is losing a bit of its relevance as the origin of nearly every development. Much as the first steel is now known to have been made in Central Africa several centuries before the Hittites (or not: see update below), the first bronze ("tin bronze" to be specific) seems now to have been made in the Balcanic peninsula, more than a thousand years before it was in Mesopotamia.

The earliest tin bronze artefacts in Eurasia are generally believed to have appeared in the Near East in the early third millennium BC. Here we present tin bronze artefacts that occur far from the Near East, and in a significantly earlier period. Excavations at Plocnik, a Vinca culture site in Serbia, recovered a piece of tin bronze foil from an occupation layer dated to the mid fifth millennium BC. The discovery prompted a reassessment of 14 insufficiently contextualised early tin bronze artefacts from the Balkans. They too were found to derive from the smelting of copper-tin ores. These tin bronzes extend the record of bronze making by c. 1500 years, and challenge the conventional narrative of Eurasian metallurgical development.

The specific well-dated finding is from Plocnik, Southern Serbia, however as we can see in the map below, most 5th millenium bronze sites are from Bulgaria. 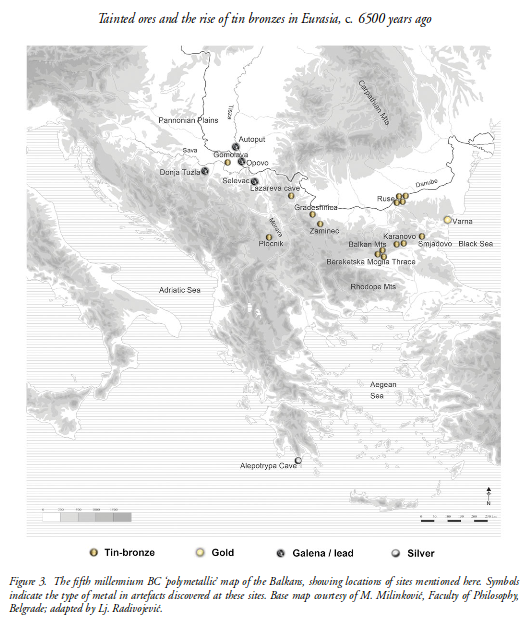 This highlights the likely central role in this earliest bronze metallurgy of the Karanovo-Gumelnita culture (very likely a full-fledged state older than dynastic Egypt), which spanned most of Bulgaria, as well as some nearby regions by the south and the north. However the neighbor cultures of Gradesnica-Krivodol (NW Bulgaria and nearby Romanian areas) and Vinca (Serbia) were also involved.

The highest quality alloys (stannite bronzes) belong to this core area of Thrace (Karanovo, Smjadovo and Bereketska Mogila), as well as Southern Serbian sites (Plocnic and Lazareva) while a second category, "high tin fahlore", seems to concentrate along the Danube (Gomolava and Ruse). A "low tin fahlore" category is rarer and seems centered in the Gradesnica area.

For some reason, maybe the disruptive Indoeuropean invasions of the 4th millennium, this technology was apparently lost later on, only to be regained from a West Asian source (Troy) already in the 3rd millennium.

An interesting question is the source of tin, which was in many cases the mineral stannite. The authors suggests further research on isotopes but also consider ancient mines that could have been sources:

Stannite is present in the Bronze Age mines of Mushiston in Tajikistan (Weisgerber & Cierny 2002), Deh Hosein in Iran (Nezafati et al. 2006), the Bolkardăg mining district in Turkey (Yener & ̈Ozbal 1987), as well as in Iberia (Rovira & Montero 2003).

The West and Central Asian mines are often argued not to have been sizable enough to be a major source of tin in the Bronze Age proper but, considering that this is a very early and limited bout of advanced metallurgy, I guess that they are also possible sources.


Update (Jan 22): I must (partly) take back my initial comment on steel metallurgy being older in Niger than Turkey: while the discovery of Nigerien steel-making c. 1500 BCE stands, other recent findings in Turkey seem to push back steel metallurgy in Anatolia to c. 1800 BCE (instead of the c. 1300 BCE date accepted before). Thanks to Aeolius for making us aware of this important detail.


Note: thanks to the Stone Pages newsletter ArcheoNews for directing me to this most interesting study.
Posted by Maju at Sunday, January 19, 2014