The issue of W-E genetic differences in Iberia has been discussed before in this blog by guest author Argiedude on the grounds of Y-DNA, showing that roughly the Western third of Iberia is distinct from the rest, most notably because of its higher presence of North African lineage E1b-M81. However the differences also appear in the mtDNA, even if they may be a bit more subtle because they cross with a N-S gradient of sorts.

A new study focused on the matrilineages of two characteristic Andalusian provinces, Granada in the East and Huelva in the West, underscores that this difference is very real.

The archeology and history of the ancient Mediterranean have shown that this sea has been a permeable obstacle to human migration. Multiple cultural exchanges around the Mediterranean have taken place with presumably population admixtures. A gravitational territory of those migrations has been the Iberian Peninsula. Here we present a comprehensive analysis of the maternal gene pool, by means of control region sequencing and PCR-RFLP typing, of autochthonous Andalusians originating from the coastal provinces of Huelva and Granada, located respectively in the west and the east of the region.

The mtDNA haplogroup composition of these two southern Spanish populations has revealed a wide spectrum of haplogroups from different geographical origins. The registered frequencies of Eurasian markers, together with the high incidence and diversification of African maternal lineages (15% of the total mitochondrial variability) among Huelva Andalusians when compared to its eastwards relatives of Granada and other Iberian populations, constitute relevant findings unknown up-to-date on the characteristics of mtDNA within Andalusia that testifies a female population substructure. Therefore, Andalusia must not be considered a single, unique population.

The maternal legacy among Andalusians reflects distinctive local histories, pointing out the role of the westernmost territory of Peninsular Spain as a noticeable recipient of multiple and diverse human migrations. The obtained results underline the necessity of further research on genetic relationships in both sides of the western Mediterranean, using carefully collected samples from autochthonous individuals. Many studies have focused on recent North African gene flow towards Iberia, yet scientific attention should be now directed to thoroughly study the introduction of European genes in northwest Africa across the sea, in order to determine its magnitude, timescale and methods, and to compare them to those terrestrial movements from eastern Africa and southwestern Asia.


Naturally the most noteworthy data is the frequency of mtDNA haplogroups in the two sampled populations: 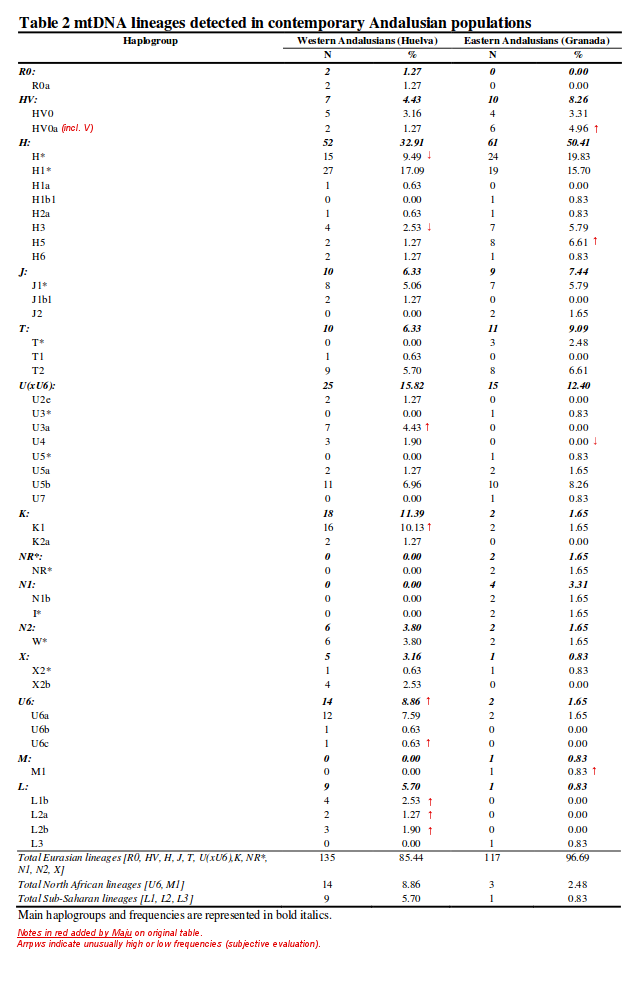 A map comparing this data with some other areas of Iberia (mostly the West) is also provided:

What makes Onubenses (the inhabitants of Huelva, ancient Onuba, West Andalusia) peculiar in relation to their Granadino neighbors is their lower frequency of H (notably H*, H3 and H5), along with their higher frequencies of K1, U3a and several North African related haplogroups (U6, L1b and L2). The peculiarities of Granadinos (notably the high H5 frequency) are not so notable in comparison.

Some of these Onubense peculiarities are reproduced in other parts of West Iberia, notably the low frequencies of H (but not at all in the NW corner), the presence of U6 (notably in North Portugal and also, not shown here, among the Maragatos of the León-Galicia border area) and to some extent the elevated frequency of K and some L(xM,N) lineages (varied localized frequencies).

Much of this seems best explained by ancient flows from NW Africa (flows which may be Neolithic, Paleolithic or from the Metal Ages but hardly related to Phoenician or Muslim colonization, which had no W-E gradient whatsoever) but I have some qualms about the quick identification by the authors of the origins of Onubense high K1 in that area. At the very least it must be noticed that, unlike the other African markers, K1 is much more common towards the Eastern parts of NW Africa and is also found at similarly high frequencies in many parts of Europe, such as France and Central Europe.

K1 was first spotted in Iberian ancient DNA in the early Neolithic (Los Cascajos, Navarre), and was an important Neolithic lineage through Europe. While I can't discard the North African suggested origin, I think that other possibilities are at least as likely.

On U6, the presence of the very rare U6c, one of two basal lineages of U6, only found previously in 5 Moroccans, 10 Canarians and in one Italian, reinforces the idea of U6 expanding from West to East (against what most conclusions suggest on the most unclear grounds) with a most likely Moroccan origin. In turn this raises the question on how pre-U6 arrived to Morocco, especially as the Aurignacoid Dabban industries now seem to never have gone further West than Cyrenaica, opening the possibility of this lineage having arrived to NW Africa via Europe, where we know that U in general was common in the Upper Paleolithic, and which clearly influenced North Africa at the Oranian (aka Iberomaurusian) cultural genesis (LGM) via Morocco (Taforalt and other sites).

On the L(xM,N) lineages, it is worth mentioning that Cerezo 2012 claimed that some of them may be pre-Neolithic in Europe, especially L1b1a variants, which are widespread at low frequencies through Europe with an Iberian centrality.

The overall picture is maybe best visualized by the Hierarchical Cluster Analysis:

Cluster 1 is particularly noticeable for its high frequency of mtDNA H, being composed by mostly Iberian samples (along with South Germans and some Sicilians). Granada, as well as nearby Córdoba, sit here (even if with a tendency towards the more mainstream European Cluster 2). Huelva is not too remarkable when compared with other European samples in the mtDNA HCA, although it does show some deviation towards NW Africa, clustering closest to Canarians.

In spite of the good frequency of North African samples, it must be noted that the horizontal axis, in essence contrasting Europe vs. West Asia, has a weight of almost 50%, while the vertical axis, contrasting these two vs. North Africans (and the Sámi) only weights 13% (axis are almost never of the same relevance in PCA-like graphs, even if they are presented as such).

In synthesis: NW Africa had some minor but significant genetic influence in the West Iberian third, long before the Muslim period, and this mtDNA study ratifies these distinctions in the particular case of Andalusia, adding some rich detail of data.

Also, as the authors underline in their discussion, the issue of European genetic influence in North Africa still requires some serious investigation.
Posted by Maju at Saturday, January 25, 2014