Iván Díaz discusses today at his blog[es] the finding of an array of fishhooks from Wustermark (Brandenburg, Germany) the oldest known ones of Northern Europe.

Prehistoric fishhooks have previously been described in northern Europe as being common since the Mesolithic. Here we present a Final Palaeolithic ivory fishhook from the site Wustermark 22 (north-eastern Germany), the raw material of which is about 19,000 years old. Five further fishhooks were discovered in situ at the same site one of which has a calibrated radiocarbon age of about 12,300 years. The tool industries of flint artefacts and bone/antler tools are associated with descendants of the Federmesser-culture and the palynological context indicates a Younger Dryas environment. Wustermark 22 represents the largest collection of Palaeolithic fishhooks so far found at a single European site. A comparison with other sites in Europe, containing Palaeolithic fishhooks suggests that the appearance and development of fishhooks may be associated with a general change in resource availability during the Greenland Interstadial 1 (Bølling/Allerød warming), which is also connected with a change from late Upper Palaeolithic to Final Palaeolithic industries in Northern Central Europe. We conclude that Mesolithic fishhook tradition has its roots in the Final Palaeolithic.

Following Díaz again, it seems that the generalization of these hooks and the corresponding fishing reliance of the economy may be related with the relative warming of the Bolling/Allerod interstadial, in the last centuries of the 15th millennium BP. 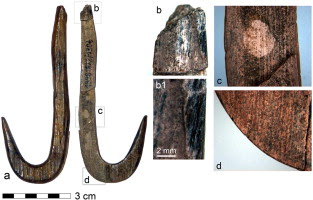 The hooks are worked primarily in wood but also from bone, flint stone, shells, antler or even ivory.

Earlier fishing hooks are known since the Solutrean of SW Europe, where they tended to be rather straight in shape (tied by the middle), gradually evolving towards the characteristic hook shape we all recognize as familiar. Earlier it is believed that fishing, as happens in many cultures, was done primarily with spears and arrows, just like hunting.

However we know that, in Timor c. 23-16,000 years ago, there were already very well shaped fishing hooks. It is possible that they used them even earlier because their open sea captures date from as earlier as 42,000 BP.
Posted by Maju at Tuesday, March 05, 2013