A most interesting study has just been published that reconstructs the prehistory of the Khoe-San peoples of Southern Africa primarily using mitochondrial DNA analysis but with very important reliance on archaeological data as well.

The current San and Khoe populations are remnant groups of a much larger and widely dispersed population of hunter-gatherers and pastoralists, who had exclusive occupation of southern Africa before the influx of Bantu-speakers from 2 ka (ka = kilo annum [thousand years] old/ago) and sea-borne immigrants within the last 350 years. Here we use mitochondrial DNA (mtDNA) to examine the population structure of various San and Khoe groups, including seven different Khoe-San groups (Ju/'hoansi, !Xun, /Gui+//Gana, Khwe, =Khomani, Nama and Karretjie People), three different Coloured groups and seven other comparative groups. MtDNA hyper variable segments I and II (HVS I and HVS II) together with selected mtDNA coding region SNPs were used to assign 538 individuals to 18 haplogroups encompassing 245 unique haplotypes. Data were further analyzed to assess haplogroup histories and the genetic affinities of the various San, Khoe and Coloured populations. Where possible, we tentatively contextualize the genetic trends through time against key trends known from the archaeological record.

The most striking observation from this study was the high frequencies of the oldest mtDNA haplogroups (L0d and L0k) that can be traced back in time to ~100 ka, found at high frequencies in Khoe-San and sampled Coloured groups. Furthermore, the L0d/k sub-haplogroups were differentially distributed in the different Khoe-San and Coloured groups and had different signals of expansion, which suggested different associated demographic histories. When populations were compared to each other, San groups from the northern parts of southern Africa (Ju speaking: !Xun, Ju/'hoansi and Khoe-speaking: /Gui+//Gana) grouped together and southern groups (historically Tuu speaking: =Khomani and Karretjie People and some Coloured groups) grouped together. The Khoe group (Nama) clustered with the southern Khoe-San and Coloured groups. The Khwe mtDNA profile was very different from other Khoe-San groups with high proportions of Bantu-speaking admixture but also unique distributions of other mtDNA lineages.

On the whole, the research reported here presented new insights into the multifaceted demographic history that shaped the existing genetic landscape of the Khoe-San and Coloured populations of southern Africa.

From the reading of the paper, I gather the following chronology (which should be always taken with some caution because of the uncertainty of "molecular clock" methods but in this case they seem reasonably backed from the material/cultural evidence record):

The paper only briefly mentions L0k1, which is most concentrated towards Katanga (D.R. Congo) and may therefore have arrived to Southern Africa only with Bantu or pastoralist flows. 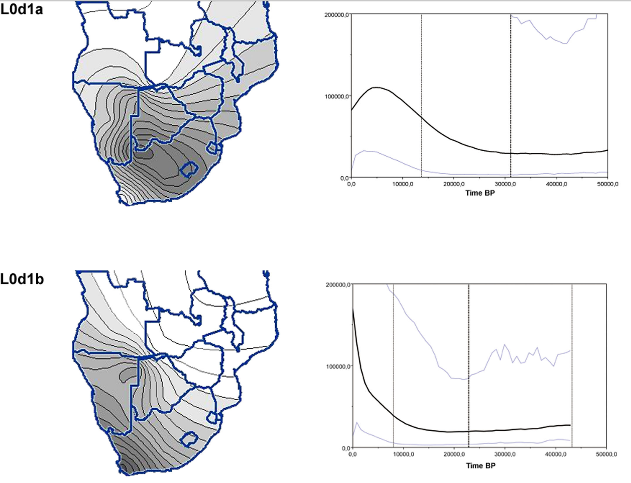 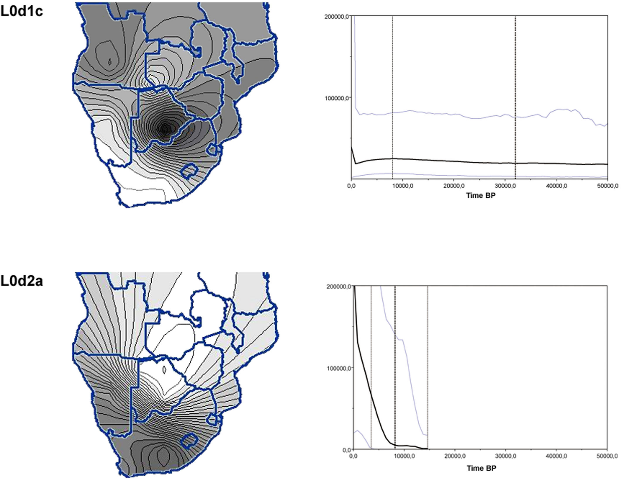 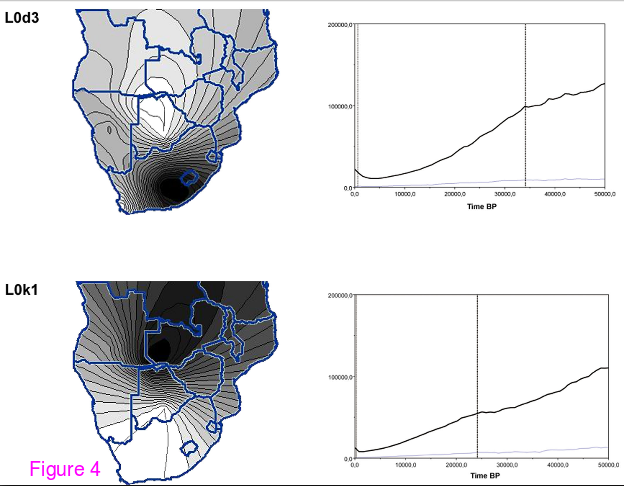