Michael Petraglia at Ancient Indian Ocean Corridors blog draws our attention to a quite interesting review on the Neolithic of the various regions surrounding the Indian Ocean, all them of rather tropical climate:

I strongly recommend full reading as I can only dedicate some space here and the study, while not really long, covers many diverse aspects of plant and animal domestication and translocation around the Indian Ocean.

First the authors deal with the issue of how the most important tropical crops of South Asia, which are mostly of African origin, arrived there. They conclude that the transfer took place at the very end of the Harappa (IVC) period, rather than earlier, even if it is confirmed that Harappa and the Persian Gulf (but not yet East Africa apparently) kept trading relations since much earlier. These African crops (millet and sorghum specially) were critical, as we know, in enabling the expansion of farming towards Southern India. 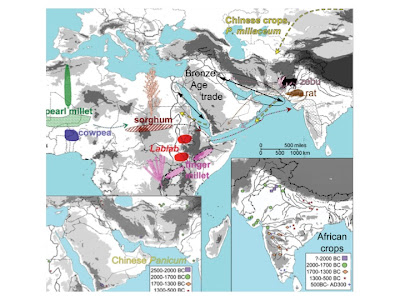 In return India gave Africa the zebuine species of cow, which, after hybridization, fueled the expansion of East African pastoralists into Equatorial areas.

This route between East Africa and South Asia is declared to be the precursor of the spice trade of later days:

The first hint of this spice trade comes from the findings of valued black peppercorns that were used to fragrance the nostrils of the deceased Pharaoh Ramses II (c. 1200 BC) (Plu 1985). This spice is endemic only to the wet forests of southern India (Asouti & Fuller 2008: 47), and in all likelihood was supplied by hunter-gatherer groups to coastal groups (Morrison 2002).

Another section deals with the transfer of diverse crops between South and SE Asia (and even as far as New Guinea).

Indian pulses migrated to the East, while a number of other crops (areca nut, sandalwood, betle leaf and maybe banana) did in the opposite direction. The origin of mangos and lemons is also discussed and seems distributed between both regions.

Many of these flows may have been from approximately the same time as the African-Indian connection, in the late 2nd millennium BCE.

Finally a third layer of agricultural flows appear to connect SE Asia with Africa, the most notable being the banana, but also yams, taro and chickens.

This one seems most likely related to Austronesian (Malay) flows in westward direction, leading to the formation of the Malagasy people and the colonization of Madagascar.

In their journey westwards, the proto-Malagasy appear to have left some maritime vocabulary in Sri Lanka, SW India and the Maldives, where they also left their outrigger technology. A variant of this one, with two outriggers, is also widespread through East Africa, from Somalia to Mozambique and, of course, Madagascar.

The Austronesians would have spread these crops and the chicken to Africa, bringing also possibly some commensals like the rat, the mouse and the Asian shrew, as well as a weed. Some of these may however been introduced in several episodes.
Posted by Maju at Wednesday, May 30, 2012