More ancient mtDNA maps of Europe: the Neolithic and Chalcolithic

With these two maps of the Neolithic/Chalcolithic period, I will consider my mapping project more or less complete. It can still be improved with a map from the Bronze Age, I guess, specially as this is the time when mtDNA H seems to advance to Northern Europe, but by the moment I consider the collection quite complete.
As with my previous maps of the Paleolithic period, I have not just taken for granted the haplogroups reported by the authors (sometimes quite surprisingly) but I have checked myself which haplogroup they should belong to with the help of PhyloTree.
The only exception are the peripheral Basque samples from Izagirre and De la Rúa, which I could not manage to find out which markers were detected, so I have mentioned them in a separate inset - because they are under the strict identification standards I have followed for all the rest.
The Neolithic and Chalcolithic ancient mtDNA maps are as follow: 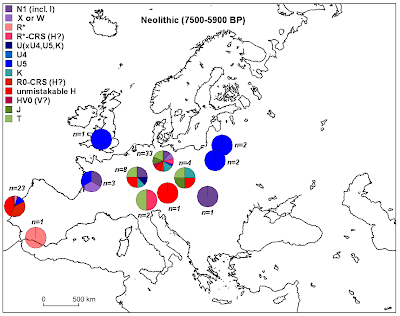 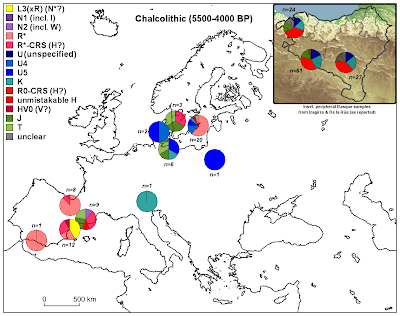 The time-frame descriptive tags correspond to pan-European chronological frames, regardless of local development.
Previously I posted (in November) three maps for the Paleolithic and Epipaleolithic (this last one including a contemporary sample from Syria/Kurdistan, which is already Neolithic). They were: 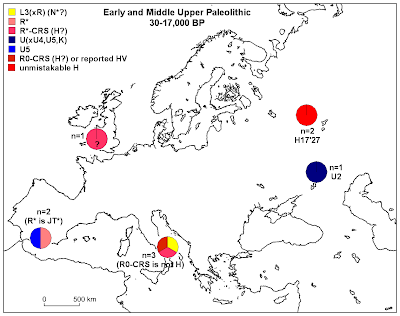 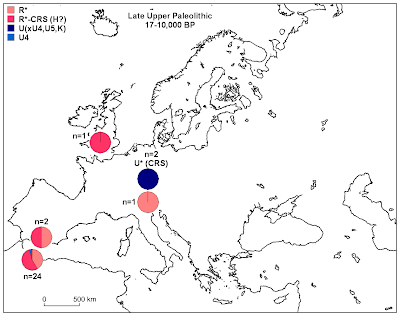 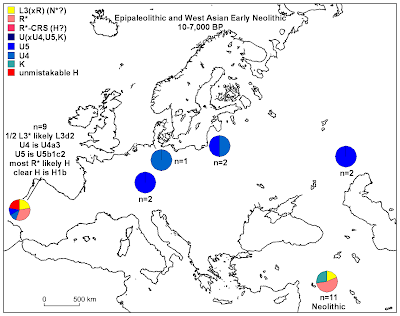 All the data I used came via the Ancient DNA pages of Jean Manco, though in some cases I had to browse the relevant papers as well.
For the record, the first clear appearances of the following large haplogroups are as follow:
I also spotted an "Oriental" lineage in Chalcolithic Castelló: either D1 or G1a1 (one of the five L3(xR) in the map).

Disclaimer: I carefully checked all reported sequences against the most recent builds of PhyloTree, trying to assume nothing. Surely most sequences have been correctly identified as far as the data and scientific knowledge allow, however if you spot any mistake, please let me know. I hate mistakes.

PS- Spreadsheet (ods format) that I used in this work is uploaded here (for one year).
Posted by Maju at Monday, May 09, 2011