The archaeological evidence was very much inconclusive in this matter of where modern horses originated. While horses were obviously central to Paleolithic cultures of SW Europe, who ate and painted them with almost religious devotion, since the end of the Ice Age and until the Metal Ages there is a fossil gap on horses, not just in SW Europe but also everywhere else.
Then the first domestic horses show up in the Eurasian steppes, north of the Caspian Sea, (notably Botai culture but also Samara and Dniepr-Don) and there is a clear expansion of this animal along the routes taken by the Indoeuropean invaders of the Kurgan cultural phenomenon.
In this sense, some believed that horses had gone extinct in SW Europe upon the arrival of Holocene. A new paper challenges this idea based on genetic diversity:
Vera Warmuth et al., European Domestic Horses Originated in Two Holocene Refugia. PLoS ONE 2011. Open access.


The role of European wild horses in horse domestication is poorly understood. While the fossil record for wild horses in Europe prior to horse domestication is scarce, there have been suggestions that wild populations from various European regions might have contributed to the gene pool of domestic horses. To distinguish between regions where domestic populations are mainly descended from local wild stock and those where horses were largely imported, we investigated patterns of genetic diversity in 24 European horse breeds typed at 12 microsatellite loci. The distribution of high levels of genetic diversity in Europe coincides with the distribution of predominantly open landscapes prior to domestication, as suggested by simulation-based vegetation reconstructions, with breeds from Iberia and the Caspian Sea region having significantly higher genetic diversity than breeds from central Europe and the UK, which were largely forested at the time the first domestic horses appear there. Our results suggest that not only the Eastern steppes, but also the Iberian Peninsula provided refugia for wild horses in the Holocene, and that the genetic contribution of these wild populations to local domestic stock may have been considerable. In contrast, the consistently low levels of diversity in central Europe and the UK suggest that domestic horses in these regions largely derive from horses that were imported from the Eastern refugium, the Iberian refugium, or both.

Notice that all but one of the samples from the Iberian peninsula are from the North and that also Occitan horse breeds like the famous Camargue show very high diversity. Hence talking of Iberian refugium may be a misnomer and we should better talk of SW Europe.
In the Eastern area, there is a limitation of sampling sites, with only two breeds representing all the potential diversity once extant in Eastern Europe, West and Central Asia. These are the Caspian horse from Northern Iran and the Ahal Teke breed from Turkmenistan (also very popular in Russia and the North Caucasus).
The essence of the results of this study is visible in fig. 1: 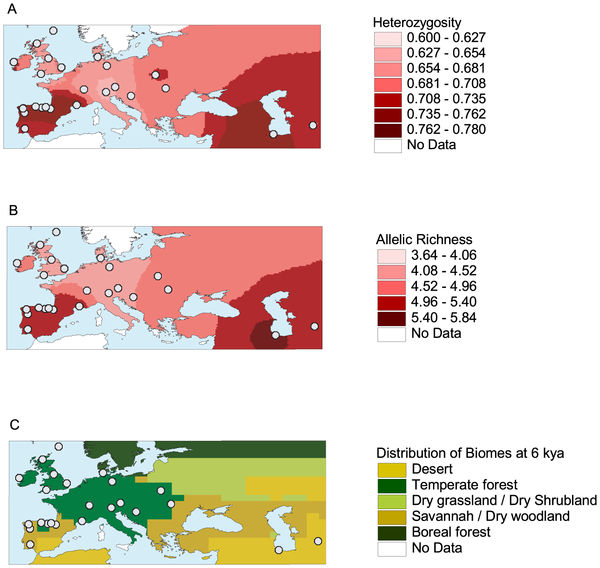 Following table 2, the highest genetic diversity (Nei's H) of all surveyed breeds corresponds to the Occitan and Basque horse breeds: Camargue and Pottoka (H=0.776 and H=0.775 respectively). Follow closely the Caspian horse of Iran (H=0.770) and the Garrano of Portugal (H=0.763) and the Galician horse (caballo gallego, H=0.762).
Another way to measure diversity is allelic richness (Rs). By this measure, the most outstanding breed is the Galician horse (6.82), followed by the Caspian horse (6.70), Garrano (6.56), Pottoka (6.52) and Camargue (6.43).
Overall we find that these five breeds cope all the highest diversity positions, being all from SW Europe, except the Caspian horse.