A quick review to some of the most interesting archaeological news from the Stone Pages' news bulletin:
Europe 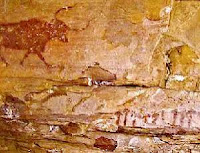 Oldest (c. 6000 years ago) European depiction of magic mushrooms (Psylocibe sp.) is in Central Spain (left). An even older one is known from Algeria (c. 9000 years ago). (New Scientist).
A very interesting research article by George Nash et al. on the Llwydiarth Esgob stone can be found at Past Horizons.
Neolithic houses found under modern ones in Saxony (Germany) (Google - Canadian Press).
South Asia
Dolmen burials discovered in Central India. The newly found megalithic sites near Nagpur are among the northernmost ones of this Iron Age cultural and spiritual phenomenon (Times of India).
East Asia
Bamboo knives excellent for meat but awful for hides, and they dull quickly. Practical research by O. Bar Yosef, M.I. Eren and others sheds light on the bamboo knife speculations regarding Eastern Asian Paleolithic (SMU Research Blog). This is so fascinating that I'll write a separate entry later on.
Rising Seas transformed rice farmers into fishermen at Fuzhou (SE China), what might have triggered the Austronesian expansion (New Scientist)
America