Some new insights in the phylogeny of Y-DNA E1b1

There is a brand new paper on Y-DNA haplogroup E1b1:

B. Trombetta et al., A New Topology of the Human Y Chromosome Haplogroup E1b1 (E-P2) Revealed through the Use of Newly Characterized Binary Polymorphisms. PLoS ONE 2011. Open access.

The new phylogeny is available in the graphic at the left (B, click to expand). And it includes the following changes:

E1b1c is now known to be part of a shared upstream haplogroup with E1b1a, which become E1b1a2 and E1b1a1, respectively. In this clade a new downstream haplogroup is also described by the name E1b1a1g1d (V39).

In this major lineage, maybe more intriguing is the finding that the two haplogroups with notable presence in Europe, are now subsumed into larger clades: E1b1b1a (V68) and E1b1b1b (V257). These two haplogroups are notable because:

Within E-M35, there are striking parallels between two haplogroups, E-V68 and E-V257. Both contain a lineage which has been frequently observed in Africa (E-M78 and E-M81, respectively) [6], [8], [10], [13]–[16] and a group of undifferentiated chromosomes that are mostly found in southern Europe (Table S2). An expansion of E-M35 carriers, possibly from the Middle East as proposed by other Authors [14], and split into two branches separated by the geographic barrier of the Mediterranean Sea, would explain this geographic pattern. However, the absence of E-V68* and E-V257* in the Middle East (Table S2) makes a maritime spread between northern Africa and southern Europe a more plausible hypothesis.

How can this be?

This is most intriguing, really. And it is worth hence considering which populations harbor these two paraphyletic clusters:

For comparison with their larger sister clades (and in general Y-DNA E), I include here fig. 1 from Semino 2004, after annotated current YSOGG nomenclature (in red) and, where needed, the new proposed nomenclature of this paper (in blue): 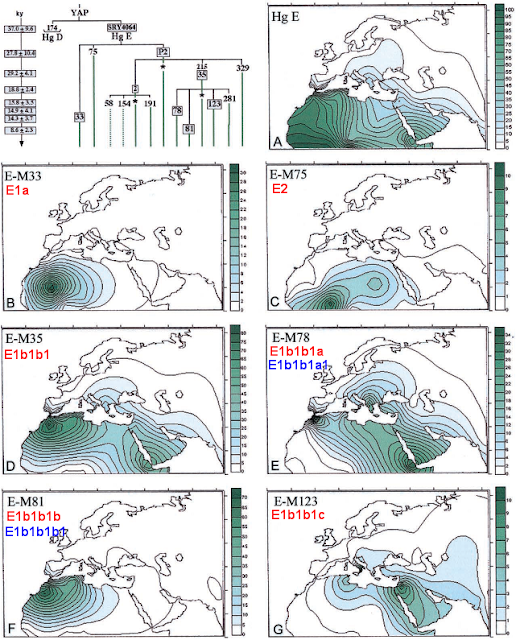 Notice that the actual distribution of these lineages is somewhat imprecise, for example, if you look at the more detailed compilation by Argiedude, you will notice that E-M81 in Iberia has a mostly Western distribution, with some presence in the East but very low in the SE, it is not the simplistic South-North cline depicted above (E-M78 follows a very similar pattern). It may be the same in other areas.

I would think that this maritime migration proposed for these two paragroups, is highly suggestive of a flow into Iberia in the context of the Oranian (or Iberomaurusian) culture genesis in North Africa and the related changes (back-tip and wings in arrow heads notably) in the Iberian Gravetto-Solutrean complex, which influenced West Iberia up to Asturias but not for example the Basque area, which remained closer to the Aquitanian and Occitan Solutrean (a purer variant of this techno-culture, not influenced by Gravettian, which appears intrusive in any case, nor the Aterian-Dabban North African substrate).

As I have said before in many occasions, I strongly suspect that this prehistorical episode is responsible for the mtDNA H and V in North Africa, as well as from mtDNA U6 and probably also some L(xM,N) in Iberia.

Similarly it is probable that the small presence of Y-DNA R1b and I in North Africa (which must be somewhat old if we have to judge from the Guanche mummies DNA) and the presence of Y-DNA E1b1 in Iberia (with "strange" extension towards the NW specially) dates from this Paleolithic episode, which happened around the Last Glacial Maximum.
The flow to Corsica and Sardinia might well be of Megalithic age.

I must admit that just a few years ago I would have been most surprised if anyone would have told me that the presence of African lineages in Iberia and other European locations was a proof of the deep Paleolithic roots of European Y-DNA (and mtDNA). Nobody told me... but it seems it is the case.

Just for the reference, I am closing this brief review with a map of the overall distribution of haplogroup E, taken from Chiaroni 2009: Notice how the European and West Asian presence of this major haplogroup is just an epiphenomenon in an otherwise clearly African clade.
Posted by Maju at Saturday, January 08, 2011