I must make mention here of this study, which seems an attempt to improve the available datasets of global human genetics, particularly the widely used 1000 Genomes Project. It has some less striking but still interesting highlights.

Here we report the Simons Genome Diversity Project data set: high quality genomes from 300 individuals from 142 diverse populations. These genomes include at least 5.8 million base pairs that are not present in the human reference genome. Our analysis reveals key features of the landscape of human genome variation, including that the rate of accumulation of mutations has accelerated by about 5% in non-Africans compared to Africans since divergence. We show that the ancestors of some pairs of present-day human populations were substantially separated by 100,000 years ago, well before the archaeologically attested onset of behavioural modernity. We also demonstrate that indigenous Australians, New Guineans and Andamanese do not derive substantial ancestry from an early dispersal of modern humans; instead, their modern human ancestry is consistent with coming from the same source as that of other non-Africans.

The genomes and some other information seem to be available in their dedicated webpage.

One of the highlights is explicit in the abstract: the single African origin of Homo sapiens and the single out-of-Africa migration episode are confirmed. I didn't have any doubt but there have been occasional speculations, based on nothing worth considering, on the conjecture of more than one migration out of Africa before the Holocene, maybe affecting Australasian peoples. Not at all: it's all based on mere misunderstanding on how "racial" traits evolved, those remote isolated peoples basically allow us for a glimpse on the plausible phenotypes of the early Eurasian migrants, which were probably quite dark in skin pigmentation and most often had thinly curled hair like that of most Africans. In fact, I have argued on occasion that it is very possible that straight hair and its less extreme variants, wavy and widely curly hair, are Neanderthal genetic and phenotype influences, positively selected for some unclear reason, and not part of our African Homo sapiens heritage.

The other highlight that I appreciate is that they find some errors in the 1000 Genomes Project, particularly affecting Australasians, Andamanese and some Africans (quite extreme among the Khoisan particularly). This is very apparent in this map and might explain some misleading and often puzzling conclusions made by some researchers, academic or amateur alike: 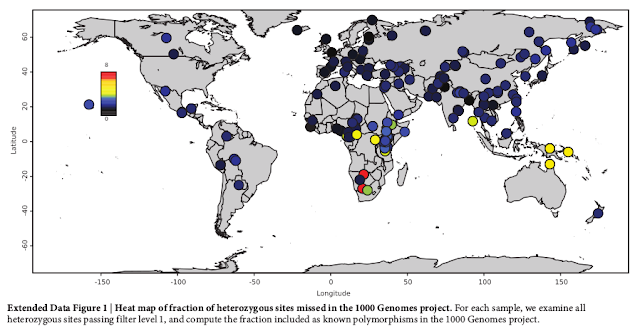 Otherwise I do not find their reconstructions of the paleo-history of Humankind, based only on autosomal DNA (not the best tool for such deep incursions, really), too helpful. But the most important thing is the existence and availability of a new, allegedly improved, global dataset.
Posted by Maju at Saturday, October 22, 2016