A Magdalenian campsite map from Catalonia 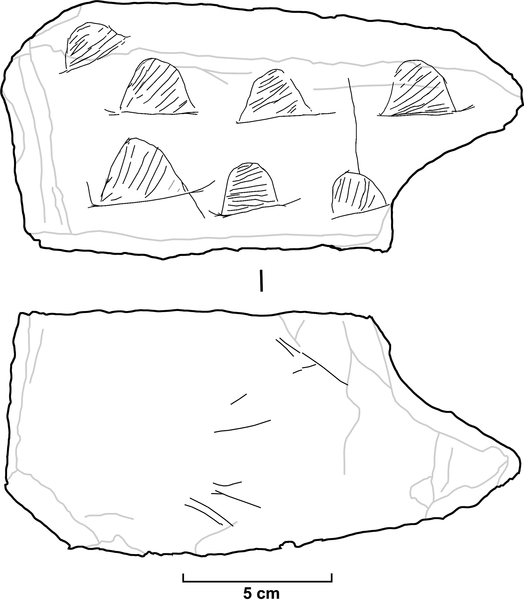 A neat curiosity from the Ice Age:

Landscapes and features of the everyday world were scarcely represented in Paleolithic art, especially those features associated with the human landscape (huts and campsites). On the contrary, other figurative motifs (especially animals) and signs, traditionally linked to the magic or religious conceptions of these hunter-gatherer societies, are the predominant themes of Upper Paleolithic art. This paper seeks to present an engraved schist slab recently found in the Molí del Salt site (North-eastern Iberia) and dated at the end of the Upper Paleolithic, ca. 13,800 years ago. This slab displays seven semicircular motifs that may be interpreted as the representation of dome-shaped huts. The analysis of individual motifs and the composition, as well as the ethnographic and archeological contextualization, suggests that this engraving is a naturalistic depiction of a hunter-gatherer campsite. Campsites can be considered the first human landscape, the first area of land whose visible features were entirely constructed by humans. Given the social meaning of campsites in hunter-gatherer life-styles, this engraving may be considered one of the first representations of the domestic and social space of a human group.