Again Marnie points me towards a very interesting study, this time totally new and dedicated to archaeogenetics.

The spread of farming out of the Balkans and into the rest of Europe followed two distinct routes: an initial expansion represented by the Impressa and Cardial traditions, which followed the Northern Mediterranean coastline; and another expansion represented by the LBK tradition, which followed the Danube River into Central Europe. While genomic data now exist from samples representing the second migration, such data have yet to be successfully generated from the initial Mediterranean migration. To address this, we generated the complete genome of a 7,400 year-old Cardial individual (CB13) from Cova Bonica in Vallirana (Barcelona), as well as partial nuclear data from five others excavated from different sites in Spain and Portugal. CB13 clusters with all previously sequenced early European farmers and modern-day Sardinians. Furthermore, our analyses suggest that both Cardial and LBK peoples derived from a common ancient population located in or around the Balkan Peninsula. The Iberian Cardial genome also carries a discernible hunter-gatherer genetic signature that likely was not acquired by admixture with local Iberian foragers. Our results indicate that retrieving ancient genomes from similarly warm Mediterranean environments such as the Near East is technically feasible.


Very interestingly, the main hunter-gatherer input into early European farmers is not best explained by truly Western hunter-gatherers (Lochsbour, La Braña) but rather by a close relative from Hungary (KO1), very probably hinting to a Balcanic true source of this admixture, which Treemix puts at the very root of the Neolithic branch as something proto-KO1 and not truly close to KO1 as such:

Note: the proto-Stuttgart admixture axis to Mbuti may well be, I believe, an artifact of the famous "Basal Eurasian" thing, which is probably African admixture in the opposite direction, which is not yet well understood but quite undeniable (most patently in Y-DNA E1b).

The overall data is analyzed in both PCA and with the ADMIXTURE algorithm:

All this is very much similar to what we are used to see in other comparable studies, however it's not exactly the same and I like to emphasize that slightly (or more rarely strikingly) different points of view on autosomal data, whose processing is always subject to the limitations of statistical analysis, are important to consider, because sticking too tenaciously to any one such single POVs may cause confusion and bias.

So I annotated the supplemental materials' version of the above PCA as follows: 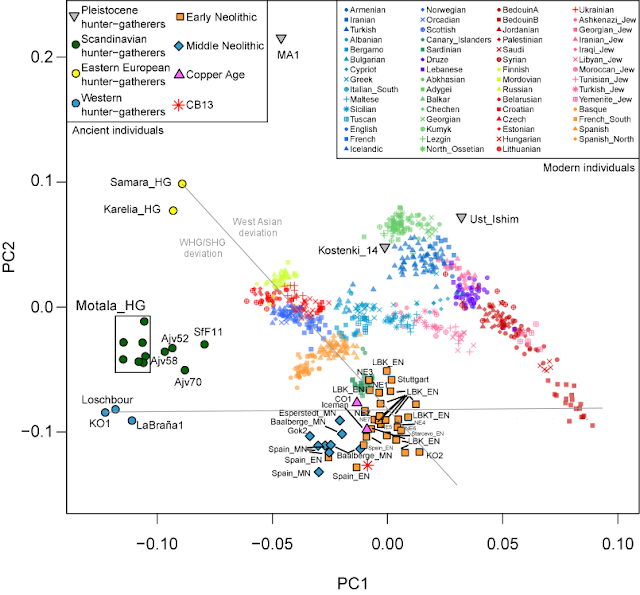 I merely drew two axes of admixture: firstly one that is strictly parallel to the PC1 axis which pretty much describes the axis of West Asian - Paleoeuropean admixture, using KO1 as reference. In West Asia it falls on the (Naqab) Bedouin B sample. While early Neolithic ancient samples approximate this axis (at a roughly 60:40 apportion location), it is very apparent that they do not fall strictly on it but are rather spread above and below the main axis. Those falling above the axis may have minor extra EHG or other "Oriental" admixture but many fall below it and so far we lack ancient references that could inform us about what is causing that deviation (although intuitively it would seem something African or at least "hyper-Mediterranean"). This tendency is reinforced in all the Middle Neolithic (Early Chalcolithic) samples, which also tend (along with Spain_EN) further towards the WHG polarity (something also apparent in the ADMIXTURE graph). So it is probably something that was in that WHG-like influence, which is however "too Mediterranean" for even La Braña.

Is it something from the original Balcanic HG (Lazaridis' UHG) admixture? Iberian but distinct from La Braña? Is it something North African? Or something else? I can't say at this point, all I can say is that the references needed for that fine tuning are missing so far.

The other axis I annotated was something that the PCA was almost commanding me to do: the axis spanning from Samara_HG to Sardinia and the bulk of Early Neolithic samples was just there crossing right in between the bulk of modern European samples. In this graph, even if there are no Yamna nor Corded Ware samples, they seem not to be needed: Eastern European hunter-gatherers explain everything on their own. On the other hand Ma1 (alias ANE) is sitting up there, almost hidden between the legend boxes, not needed anymore to explain anything, because Samara_HG does the job much better.

So what is left of what some have called the fateful triangle of European admixture, first proposed by Lazaridis 2014 as a {x.EEF+y.WHG+z.ANE} formula? In this PCA at least it seems we can ignore the three elements and replace them for a better fitting {x.Spain_MN+y.Samara_HG+Bedouin-B} formula: 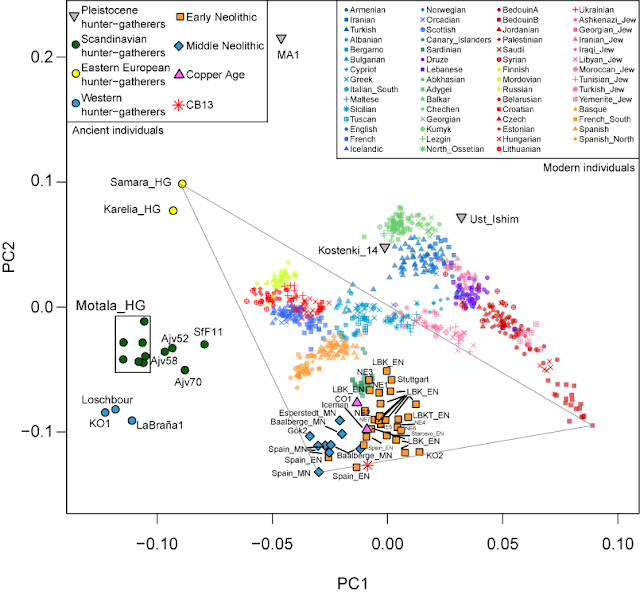 It would need of course further testing but at least in this PCA it works very well and even most Sicilians and some Maltese fit within it, something that was not the case with the Lazaridis formula, whose triangle (not shown) run between Stuttgart, Lochsbour and Ma1 and would effectively exclude Sicilians and Maltese also in this PCA, as well as leaving huge empty areas towards the left (WHG) and top (Ma1).

I've tried to do something similar using Starcevo (KO2) and Corded Ware or Yamna (not shown here) but they tend to exclude a much larger number of modern Europeans, not just Balcanics and Italians but also some Northern Europeans like Lithuanians. It can of course explain many things but it's not so inclusive.

Of course, it does not need to be a triangle. In fact it is very likely that a fourth polarity runs between Basques and Cypriots towards the North Levant, going through Spain and Sicily. This axis does not seem to be explained by either Neolithic or Kurgan-like admixture since the late Chalcolithic and very probably indicates some other specifically Mediterranean source of admixture that at the very least influenced Italy and the Balcans.

In fact this cross-like structure of European autosomal genetics is invariably more apparent when only (or almost only) Europeans are considered. It is also apparent here but goes rather diagonally because of the heavy weight of the West Asian (and various Jewish) samples.

In any case, I can draw on this PCA a rather obvious trapezoid that clearly includes all modern Europeans and also almost all Neolithic and post-Neolithic known ones: 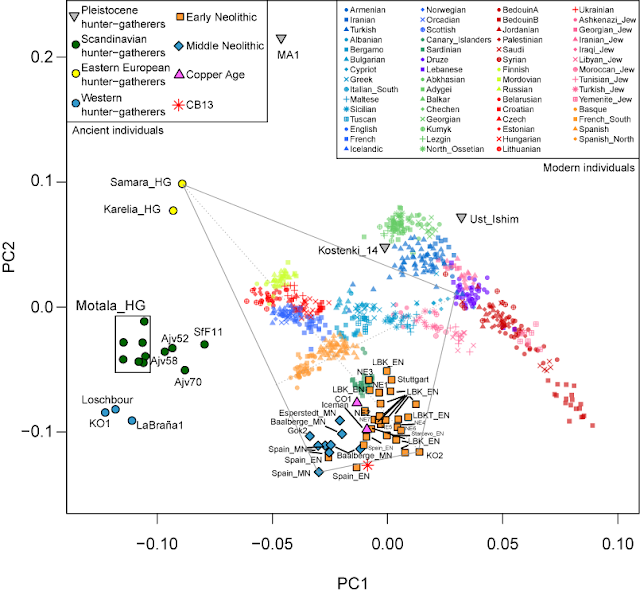 It works much better than any triangle I could imagine. Within it I also drew (dotted lines) what seem to be the most important axes of European variation, which should roughly correspond to PC1 and PC2 in any Europe-only analysis. The first one runs between KO2 (Starcevo culture) and Samara_HG, and, as I said before, the figure itself was calling for it, being almost identical to the one I drew above. It is likely that the best reference is not quite KO2 but some Greek hunter-gatherer that still awaits to be studied and should be further down in the PC2.

The other axis I drew is also demanded by the scatter of the graph and would roughly correspond to the PC2 of a Europe-only analysis. This axis is clearly displaced to the Samara_HG polarity relative to the Neolithic and Early Chalcolithic European samples, what seems to suggest that this admixture corresponds to a time after the first Kurgan impact, possibly the Bronze or Iron Age.

However the period when Cyprus (which seems to be one of the polarities) would seem to play a most active role in the Mediterranean overlaps with the Kurgan expansion and only barely touches the Bronze Age, being rather Chalcolithic. One could also think of Phoenicians but it does not make much sense that Phoenicians had such an impact (they did not even colonize most of Sicily, let alone Italy or the Balcans). I don't have a good answer yet but my impression is rather something of the Late Chalcolithic, early Bronze at the latest, and hence overlapping in time with the Kurgan impact but with a Mediterranean dimension.

Of course the Cypriot reference may be misleading and is something more loosely Anatolian (even if not quite like modern Turks either). In any case the Bronze Age (Late Bronze in the Eastern Mediterranean), when Mycenaean Greeks ruled the waves, after the collapse of the Eteocretan civilization, seems a bit late. I'll leave it at that: the window for this change affecting especially SE Europe seems rather narrow: late Chalcolithic and early Bronze Age at the latest.
Posted by Maju at Friday, September 04, 2015