I must congratulate again Palisto of Kurdish DNA blog for his excellent work on the description of HERC2 haplotypes and their frequency across world populations. It is not a peer-reviewed academic paper but it could well be, and within the high quality sector.

After initially detecting seven haplotypes in the Kurdish genetic pool (which were named ht1-7) and then studying these in the Eurasian gene pool, he decided to study the African haplotypes, largely in the "other" category, as well as comparing them all with the known Neanderthal and Denisovan sequences, at the very least to infer a root. The main result is this tree: 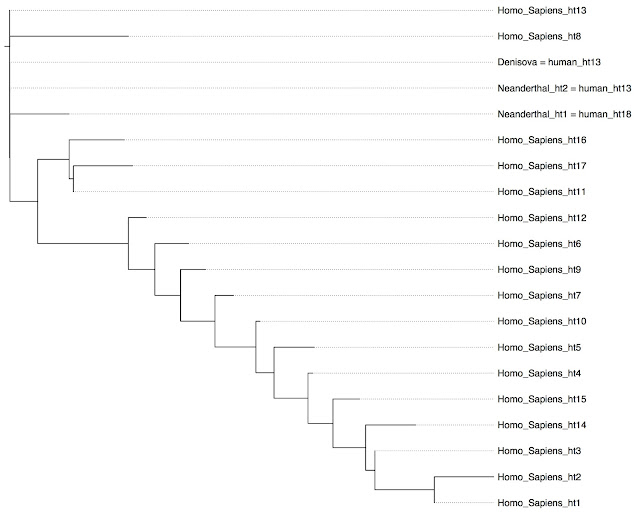 So the ancestral haplotype is ht13, found not just among Neanderthals and Denisovans, but also among scattered populations of H. sapiens both in Africa as in Eurasia-plus.

From it hang ht8 (Homo sapiens, found in and outside Africa) and ht18 (Neanderthal-exclusive).

This main branch has two major sub-haplogroups, which I will label D and E for convenience (A would be ht13, B ht8, and C Neanderthal-only ht18). Haplogroup D (hts 11, 16 and 17) seems to have remained in Africa (only ht 11 was detected at low frequencies in Lebanon), while haplogroup E (all the rest) massively participated in the migration out of Africa (OoA).

However it must have done already in highly diversified form, as most named haplotypes are found at significant frequencies both outside and inside Africa. There are four exceptions only:
These are the wider regional frequencies: 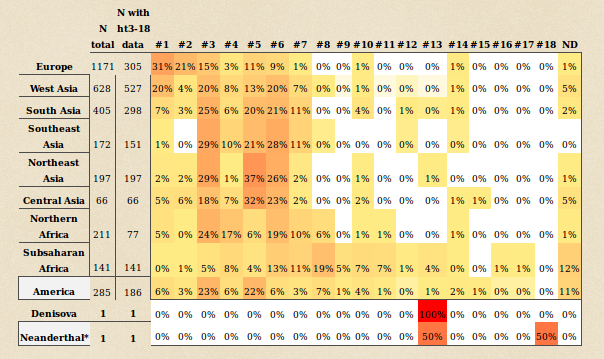 However at the original article there is a much more detailed list, which is probably more interesting to use when pondering each haplotype. For example the overall data for America is pretty much irrelevant, as it groups native peoples with mixed creole ones.

For example we can see that "blue eyes" ancestral haplotype ht2 looks like originated in West Asia, and it may also be the case of its descendant ht1.

Ht 15 in turn may well have coalesced in Altai, from where it spread to mostly Native American peoples (represented by Mestizo Colombians). A similar pattern can be seen in ht14, however this must be original from Africa (the Biaka have it, as do Mozabites) and therefore it is found also in some other scattered populations like Cambodians, Sindhi, etc.

Something I wonder about is the low diversity displayed by East Asians in this haplotype. Or inversely, why did West Eurasians evolve so all non-African novel variants? While there is still some left to analyze in the ND box, it is very small in East Asia. I wonder if it has some relation with skin pigmentation pathways indirectly influencing this change somehow.
Posted by Maju at Thursday, July 04, 2013