The study deals with the anthropology, ethnology and linguistics of the African state, and especially with the haploid genetics (although more in detail with the Y-DNA side of the matter than with mtDNA). It is very much worth reading for anyone interested on the anthropology and population genetics of Africa and in particular the Horn region.

Personally I find most interesting the fact that there seem to be some correlations between Y-DNA and mtDNA. The author mentions that there is such correlation in diversity but it seems apparent that there is some more than just that, as should be obvious for example in the following graphs: 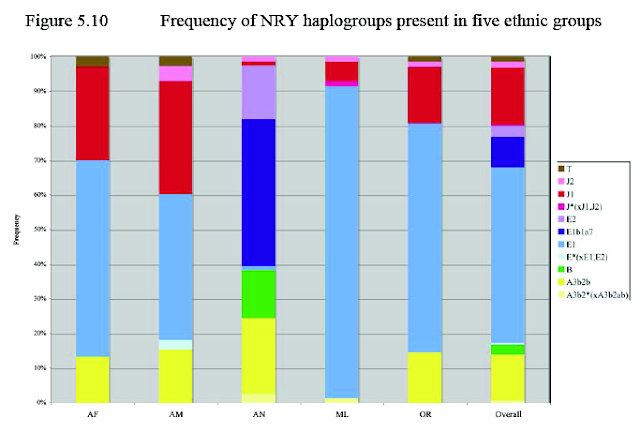 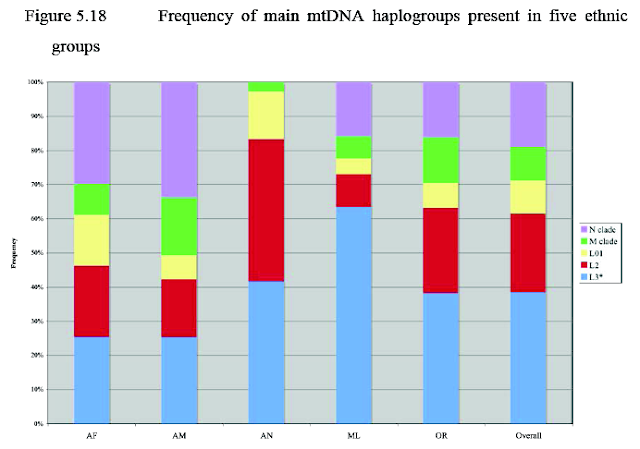 In a simplistic scenario in which one or several waves from Eurasia would be the only element to consider, we would expect similar apportions for male and female lineages or even noticeably more immigrant Y-DNA. This is not the case and therefore it is perplexing.

After some thoughts on the matter I realized that the situation is similar, mutatis mutandi, to the one of North Africa. This probably means that the cause of both anomalies can well be the same: a relatively recent (Epipaleolithic?) expansion of Afroasiatic-speaking peoples with mostly African male lineages (typically E1b1b-M215). But notice that in North Africa also J1 (ultimately from West Asia) appears to be also important in the Afroasiatic phenomenon, as it is in the Horn (and certainly in West Asia), making the situation even more complex for interpretation.

In this regard it is worth mentioning that haplotype networks from this study show that while the Amhara and Oromo J1 is intermingled and diverse, the Afar J1 forms a very tight cluster, strongly suggestive of an ancient founder effect.

Another such apparent correlation could be Y-DNA E1 and E1b1a7 with specific subclades (?) of mtDNA L0/L1 (probably L0) and L2. At least the apportions are almost identical among the Anuak (but not among other groups, hence why I suggest specific subclades to be determined).

It is a pity that no more fine detail was achieved with mtDNA, especially the more purely African part of it, i.e. L(xM,N). Much better detail is provided instead for the once-backmigrant M and N derived lineages (table 5.9), from which I highlight the following (only >5% shown):
I would seem that even the Omotic, the most remote Afroasiatic branch according to linguists (some even consider it a distinct family), have some Eurasiatic genetic influence. However I'd say that this influence is at least largely pre-Neolithic and has been subject to deep reshaping by internal African dynamics as suggested above. Still Neolithic and even maybe post-Neolithic layers of West Eurasian deposition are also apparent in the structure - always in my understanding.


Ethio Helix has updated with extra information not included in the thesis.  Notable is a graph with much greater detail on the Y-DNA haplogroup distribution.

The E1* block is now split between a number of E1b1b subclades and some important dose of E1b1c, which is the dominant lineage among the Maale (and hence maybe among other Omotic peoples). Among the E1b1b sublineages, the Afar are relatively dominated by E1b1b1e, while the Maale have an important bloc of E1b1b1c1 and the Oromo appear dominated by E1b1b1a1b.

The B bloc is also split in several subclades, all them only relevant among the Anuak (most of it B2a and most B2a within B2a1a.

It is also quite notable that some J(xJ1,J2) has been found among the Maale. For reference on this rare paragroup, I'll mention that another niche of J* is the nearby island of Socotra (74%, probably a verly local founder effect and specific lineage to be described) and there is also some J* reported among peninsular Arabs, some Turks, Greeks, Jews and a few others - but otherwise most Y-DNA J either belongs to J1 or J2.
Posted by Maju at Tuesday, November 27, 2012