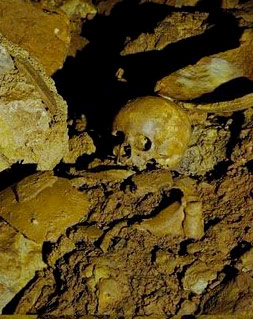 The expansion of an existent pig farm from 1000 to 8000 heads per annum threatens to contaminate the cave, inhabited in the Chalcolithic and Paleolithic, with pig manure.

Foissac (Aveyron department, Languedoc) is particularly wealthy in burial, pottery and other Chalcolithic remains, which are preserved in situ because of exceptional conservation conditions (it was dug up by F. Rouzaud, M.-A. Garcia and H. Duday between 1978 and 1988).

More recently (2006) a branch of the same cave was found to have Paleolithic rock art, which would be at risk by this farm.

There is an ongoing public inquest (ending on September 27) which has been given no publicity. However you may want to write to the authorities at the following address:

There is also an online petition that you may sign.

See also the official site of the Foissac Cave.
Posted by Maju at Thursday, September 20, 2012